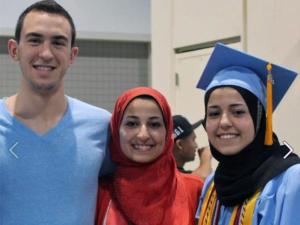 Raleigh, N.C. — Two years after three Muslim students were killed in Chapel Hill, their families held an open house Friday at a community center dedicated to preserve their legacies.

Deah Shaddy Barakat, 23, his wife, Yusor Mohammad Abu-Salha, 21, and her sister, Razan Mohammad Abu-Salha, 19, were fatally shot Feb. 10, 2015, at the couple’s condominium in Chapel Hill. A neighbor, Craig Stephen Hicks, has been charged with murder in their deaths and could face the death penalty if convicted.

The families of the victims renovated a house Barakat owned at 202 N. Tarboro St. in Raleigh and converted it into a community center known as “The Light House.” Barakat’s first name means “light” in Arabic.

A quote from Martin Luther King Jr. – “Darkness cannot drive out darkness. Only light can do that.” – spreads across the front of the center, which provides financial support and a physical space for faith-based groups to spread the message of peace, tolerance and acceptance.

“No matter what anyone else wants to tell anybody about a parking dispute,” said Barakat’s older brother, Farris Barakat, who spearheaded the Light House project, “Muslims in that time, immediately after the murders two years ago, they were afraid of being Muslim.”

Chapel Hill police have said an ongoing dispute between Hicks and his neighbors prompted the shootings last year, but the families believe the deaths were motivated by anti-Islamic sentiment.

The FBI investigated whether to pursue federal hate crime charges against Hicks, but no such charges have ever been filed.

Farris Barakat said he hopes this community center will eventually be filled by groups from all religions. He said he’s currently working with two groups.

“That’s where bridging the gap of understanding is not just something I’m able to do, but it’s like saving lives at the end of the day, essentially,” he said.