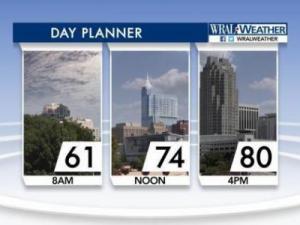 Raleigh, N.C. — Temperatures are on the rise Sunday afternoon even after the area broke records set for the day back in 1999 and 1965.

According to WRAL meteorologist Mike Moss, the warming that began on Saturday will continue on Sunday with a southwesterly wind that will boost temperatures to 80 degrees by 4 p.m.

The warmth took over quickly in the Triangle, with 79-degree temperatures reported at Raleigh-Durham International Airport at 1 p.m.

Those temperatures shattered old records, which include a high of 75 degrees at RDU (set in 1999) and a high of 78 degrees (set back in 1965) in Fayetteville.

Temperatures for the remainder of the week will not be nearly as warm, with lows in the 40s Sunday night and highs back in the 50s starting Monday.