‘My Husband Is Here and He’s Shooting’: Victim Testifies in Wendell Double Homicide 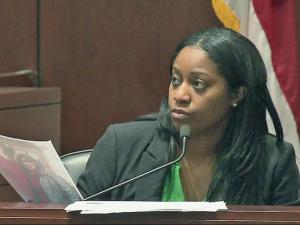 The defense admits Holden, 32, shot Allen and her parents, Angelia Smith Taylor and Sylvester Taylor, on April 9, 2014, at their home in eastern Wake County. Allen’s three children with Holden, a 15-year-old boy and two 8-year-old girls, were in the home at the time, but they were unharmed.

A big part of Allen’s testimony Wednesday morning was centered about what happened in the weeks prior to the violent attack.

She said she tried to get a restraining order against Holden as he followed her around downtown Raleigh, yelling and threatening her.

Allen said she then got a call from a school resource officer at her son’s school who said they had received information that Holden was planning to kill her and her children that day – a foreshadowing of what was coming a few months later.

On the evening of April 9, 2014, Allen said she was not feeling well and decided not to go to Bible study with her mother and two daughters.

Soon after they returned home from church, Allen said she heard Holden’s truck pull in the driveway. She was laying in her bedroom.

Allen said she heard more gunshots and people running through the home when she attempted to get her children in a closet.

“I called the police and said ‘My husband is here and he’s shooting,'” she said.

Holden shot Allen in the face and chest before the gun jammed, then Holden beat her with the butt of the pistol, investigators said.

“I was down on the floor. I remember being down on my knees, and at that time I had lost eyesight in one of my eyes. He was still hitting me. He stood over me and shot me,” Allen said.

She said that was the last thing she remembered until EMS workers arrived.

Nathan Holden’s attorneys say the murders were not pre-meditated. If he is convicted he could face the death penalty.