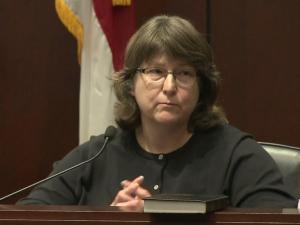 Raleigh, N.C. — On the third day of testimony in the murder trial of Nathan Holden, a trauma doctor described the dramatic injuries his ex-wife, LaTonya Taylor Allen, suffered in an April 2014 attack.

Holden shot Allen in the face and chest before the gun jammed, then Holden beat her with the butt of the pistol, investigators said.

Holden does not deny that he killed Allen’s parents, Angelia Smith Taylor and Sylvester Taylor, and tried to kill her in their Wendell home, but his lawyers plan to argue that his rampage was not pre-meditated.

Allen and Holden were divorced at the time of the attack, and she and her children were living with her parents.

Allen spent eight days in the hospital recovering from her injuries,” Lilley said.

“She was very determined to go to her parents’ funeral,” Lilley said. “I think she’s a strong woman.”