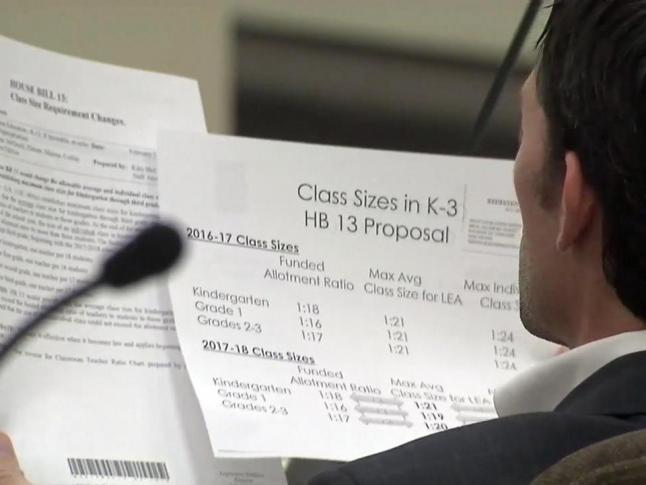 By Laura Leslie and Matthew Burns

Raleigh, N.C. — The House voted 114-0 on Thursday to back a measure that would undo the unintended impact of a 2016 budget provision that put a hard cap on class sizes in early grades.

Currently, school districts have some flexibility to make their average class size slightly larger than the size state officials use to calculate how many teachers to fund for each district. Historically, local school officials have used that flexibility to create and pay for teaching positions in non-core areas such as physical education, music, art and languages and to help delay the need to build new classrooms when enrollment is higher than expected.

Last year’s budget bill included a provision taking away that flexibility for class sizes in kindergarten through third grade, beginning in the 2017-18 school year. The provision required all teachers funded by state allotment to teach in core areas, and the hard cap on class sizes would require most districts to add classrooms through the use of mobile units, new construction or splitting up areas currently used for other purposes, such as gymnasiums or cafeterias.

Rep. Gale Adcock, D-Wake, said the change would mean the Wake County Public School System would have to hire another 460 teachers and build 400 classrooms, totaling $320 million in personnel, capital and operating expenses.

House Bill 13 doesn’t change the lowered class size targets in K-3, but it allows school districts’ average class size to exceed those targets by up to three students and allows individual classrooms to exceed the target size by up to six students, if needed.

“We’re rushing through a bill that will increase class sizes,” said Jackson, D-Wake. “Rather than investing in our classrooms, Republicans created a situation where lower class sizes can only come through devastating cuts in the classrooms down the hall.”

Rep. Chuck McGrady, R-Henderson, denied that the bill increases class sizes. Rather, he said, it simply returns flexibility to schools to move staff around.

The bill now heads to the Senate.