Raleigh, N.C. — Anyone hoping for a return to winter temperatures will have to wait for at least the next week, WRAL meteorologist Aimee Wilmoth said.

Highs Sunday climbed into the low 70s, and above-normal temperatures will stay put throughout the work week.

“I don’t see any cold air in the future,” Wilmoth said. “We’ve got a greater than 70 percent chance of temperatures staying above normal through all of this week. It will feel like spring for sure.” 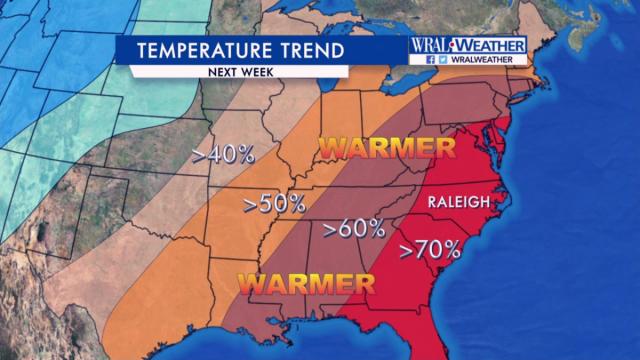 Aside from Tuesday, which will likely be in the mid-60s, daytime highs will climb into the low to mid-70s each day as lows hover in the 40s.

Late in the week, temperatures could push toward 80 degrees, Wilmoth said.

Rain is possible late Tuesday into Wednesday as a cold front pushes through the state, but totals won’t be significant.

Another round of precipitation is possible later in the week as well, although the timing on that isn’t quite as firm.

“We’ll keep an eye on the late-week system, which could generate some rain late Friday night into Saturday,” Wilmoth said.