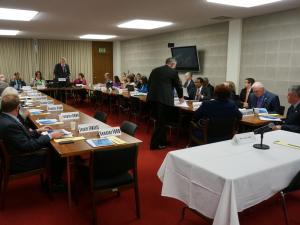 “By disrespecting this process, Secretary Hall is defying the law,” Meredith, R-Cumberland, said in the latest public tableau to play out in the months-long power struggle between Republican lawmakers and Democratic Gov. Roy Cooper.

Meredith said that Hall, and by extension Cooper, would have one more chance Thursday to comply with a newly implemented confirmation process.

“There are consequences when state officials refuse to follow the law,” he said before quickly gaveling the committee meeting to a close.

It is possible that senators could subpoena Hall to testify or simply vote down his confirmation, which would effectively be an attempt to remove him from office.

Cooper’s office didn’t immediately respond to request for comment Wednesday, but in letters and news releases Tuesday insisted that the Senate doesn’t have the authority to carry out the hearings.

“Those types of threats are absolutely inappropriate,” McKissick said, lighting into his Republican colleagues for perpetrating a “political charade.”

He noted this was not the first time that Republicans had threatened consequences. They used similar language about the courts when a three-judge panel put a temporary halt to the hearings.

The disagreement between Cooper and the GOP-led General Assembly dates to December, shortly after Cooper ousted Republican Gov. Pat McCrory. During a special session, lawmakers passed a pair of bills circumscribing Cooper’s authority. Among the provisions of those two measures was a requirement that senators confirm Cooper’s cabinet, something that would be a first in state history.

Cooper has sued to stop the confirmation process. The three-judge panel refused last week to grant him a preliminary injunction, saying that the governor had not suffered any harm as a result of the Senate proceedings. However, the same order suggested that senators had to wait until Cooper officially sent his nominations to the legislature.

While one reading of the law says that Cooper has until May 15 to send his nominations in, Meredith and other senators point out that Hall and seven of his colleagues have been appointed, sworn in, are drawing paychecks and are publicly serving in their positions.

“It is ridiculous that he has chosen not to come,” Sen. Ralph Hise, R-Mitchell, said.

Asked if Hall and Cooper might not believe the Senate is allowed to conduct hearings, Hise was dismissive: “If they don’t believe we have the authority to call (confirmation hearings), they can’t read.”