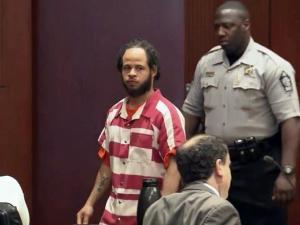 Raleigh, N.C. — Attorneys on Thursday were making their closing arguments in the double murder trial of Nathan Holden.

Holden, 32, does not deny that he shot and killed his ex-wife’s parents and shot and pistol-whipped his ex-wife in April 2014, but his lawyers, trying to save him from the death penalty, have said that his rampage was not premeditated.

Holden’s defense consisted of just a day of witnesses, family members who painted a picture of the defendant as a loving father pushed him to the brink.

Before his testimony and without the jury in the room, Holden’s father, Jamal Carroll apologized to the families of the victims for their loss and pain.

Carroll remembered the phone call he received from Holden on the night of the murders.

Closing arguments were scheduled to begin Thursday morning, and the jury could begin deliberations as early as Thursday afternoon.