Trained and Certified, Drone5 Is Ready to Fly 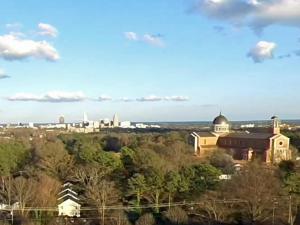 “Using new technology to innovate local news coverage is in our DNA,” says WRAL-TV vice president and general manager Steven D. Hammel. “Our engineers and technology teams have been working on the processes, safety and training for three years. We’re excited to show our viewers a whole new vantage point from the Drone5 fleet.”

WRAL has two certified drone pilots with three others currently in training. The pilots fly a DJI F-550, 6-blade drone, a DJI Inspire 1, and a DJI Phantom 4 Pro.

“Safety is job one,” says Tony Gupton, WRAL’s engineer in charge of the drone project. “We are confident that after three years of learning, studying and developing our own safety training program, we are now training our own staff to take over the Drone Fleet to bring our viewers unique news coverage.”

Since 2014, the station has been a leader in safely implementing this new technology. WRAL’s parent company, Capitol Broadcasting, was one of 15 leading media companies in a news media coalition that worked with the FAA and the Mid-Atlantic Aviation Partnership to develop safety standards, design a test program and research how drones can be used by journalists for news gathering purposes.