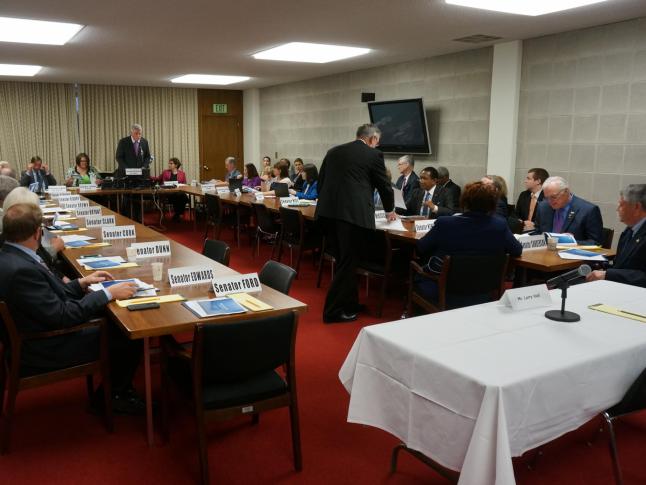 Raleigh, N.C. — Gov. Roy Cooper has asked a court to kill, or at least modify, a subpoena by lawmakers who want to compel Secretary of Military and Veterans Affairs Larry Hall to testify at a confirmation hearing next Thursday.

Hall has been the test case for a new law giving the state Senate the power to confirm or reject the governor’s cabinet appointments. Cooper contends the law unconstitutionally trammels on his powers and said the court should issue an order that shields Hall from testifying until a larger dispute involving the confirmation requirement is settled.

“The Senate continues to go against the wishes of the court and ignore its previous order, so we’re asking the court to step in and halt this unprecedented event,” said Cooper spokeswoman Noelle Talley. In his court filing, Cooper asks the judges to say that Hall doesn’t need to testify during a March 2 confirmation hearing and won’t need to respond to the legislative summons unless the court ultimately finds the confirmation law is constitutional.

As much as the fight is a partisan conflict between a Democratic governor and a Republican-held General Assembly, it is also part of a long line of power struggles between the executive and legislative branches that have been pursued at various points by members of both parties.

State senators, who issued and served the subpoena Thursday after Hall didn’t attend a third scheduled confirmation hearing, penned a response to the court filing Friday suggesting that Cooper was trying to hide potential conflicts of interest from the public.

“It is absurd that Roy Cooper continues to make the case that his cabinet secretaries – who have taken their oaths of office, go by the title of ‘secretary,’ collect six-figure paychecks and have hired their own deputies – are somehow not nominated,” Senate President Pro Tem Phil Berger said in a statement. “The legislature would never tell a witness not to appear to testify in court, so we hope the court would not tell a witness not to testify when subpoenaed by the legislature.”

In reality, Hall would be one of the least likely nominees to fall short of confirmation. A well-liked former House minority leader, Hall is a retired Marine for whom the State Ethics Commission found no potential conflicts of interest.

A trial on the legality of the confirmation process is scheduled for early March, but lawmakers insist they have the power to hold hearings regardless of Cooper’s objections.