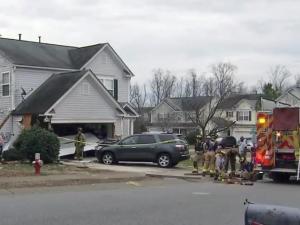 Raleigh, N.C. — The prognosis was bleak for a woman who crashed her car into two Raleigh houses in January, but her husband shared some good news Sunday afternoon.

David White said his wife, Terrie, is still at WakeMed but she’s doing much better than doctors expected.

Terrie White crashed through the garage of one home and into the side of another of Marshlane Way during the early morning hours of Jan. 18.

Authorities said Terrie White suffered a medical emergency before the wreck and one of the homeowners who heard the crash pulled Terrie White from the car and performed CPR until emergency crews arrived. Family members said she had a heart problem.

Family members said Terrie White was unresponsive for weeks and doctors told them there was a good chance she would not recover, but that was not the case.

David White said he’s thankful to the people who acted so quickly the day of his wife’s crash.

The people who live in the houses she crashed into have frequently visited the hospital during her recovery.