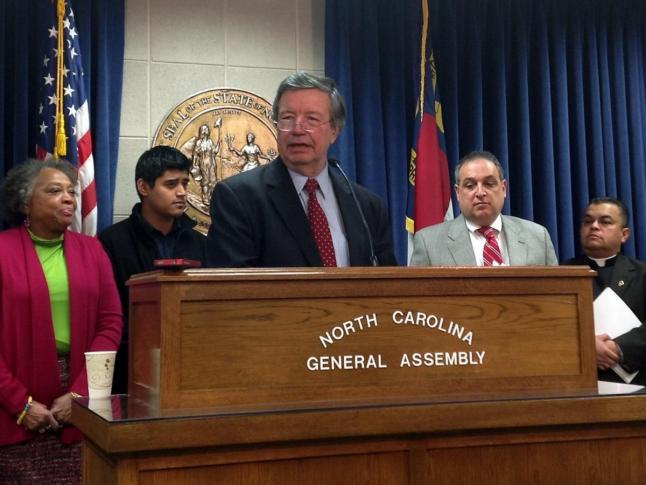 Raleigh, N.C. — Members of the state House will take time Monday to remember Rep. Paul Luebke, D-Durham, who died from lymphoma in October.

Luebke served for more than 25 year in the state House and was known as a liberal tribune in the chamber, often chastising Republicans and fellow Democrats alike for legislation he saw as counter to the best interests of working-class people. His most prominent post in the chamber was as a co-chairman of the House Finance Committee.

The House floor session is scheduled to begin at 7 p.m.

The Senate is scheduled to hold no votes during a skeleton session at 4 p.m. Gov. Roy Cooper is in Washington, D.C., for the National Governors Association winter meeting.

THE WEEK AHEAD: More fights over repealing House Bill 2 and the Senate’s ability to confirm cabinet nominees lie ahead this week.

Late Friday, Cooper asked the courts to quash a subpoena seeking to compel Military and Veterans Affairs Secretary Larry Hall to testify at a confirmation hearing on Thursday.

Meanwhile, advocates on all sides of House Bill 2 have been jockeying behind the scenes ever since House members rolled out a potential compromise to repeal and replace the controversial measure dealing with LGBT rights and the use of bathrooms by transgender individuals.

Cooper put out a social media post and video Sunday afternoon saying Republicans needed to “come to the table” to seek a solution, which drew a rebuke from the Republican who led the effort to draft the compromise bill. Rep. Chuck McGrady, R-Henderson, accused the governor of undermining efforts to come to detente on House Bill 2.