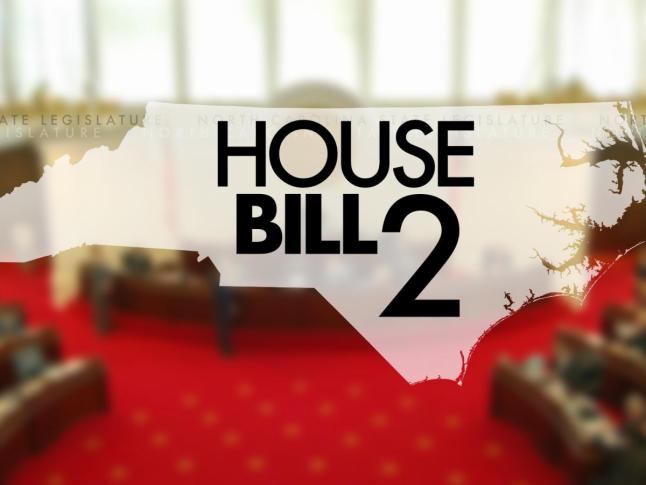 Raleigh, N.C. — Which public bathrooms transgender people are allowed to use was the major issue a year ago when state lawmakers hastily passed the state law now known as House Bill 2. But bathrooms have been subsumed by the overall LGBT rights debate as lawmakers try to undo the legislation.

Rep. Chuck McGrady, R-Henderson, last week introduced a bill that would repeal the state law, but a provision that would allow local ballot initiatives on whether a city or county could extend nondiscrimination protections to gay and transgender people has caused an outcry among LGBT advocates, Democratic lawmakers and others.

“Our children have the right to be who they were born to be and respected as they are. Human rights are not decided by popular vote. They’re just rights,” Jeanne Duwve, the mother of a transgender boy, said Tuesday at one of three news conferences at the Legislative Building over the House Bill 2 repeal effort.

House Bill 2 was passed in a one-day emergency legislative session last March to head off a Charlotte ordinance that would have required businesses to let transgender people use the public bathroom that corresponds to their gender identity. The state law not only nullified that ordinance by requiring transgender people to use the bathroom that matches the gender on their birth certificates in schools and other public buildings – businesses could set their own bathroom access rules – it also created a statewide nondiscrimination policy that excluded the LGBT community.

The law brought nationwide scorn on North Carolina, with the NBA moving the 2017 All-Star Game from Charlotte to New Orleans and the NCAA and Atlantic Coast Conference pulling more than a dozen championship events from the state. Businesses also scrapped planned expansions, entertainers canceled concerts and organizations shifted their conventions elsewhere.

Business leaders across the state have pushed for a repeal of the law for months, and representatives of real estate and tourism groups joined McGrady and other sponsors of House Bill 186{{/a}} during a Tuesday news conference. But none of them specifically backed the measure’s provisions, only the fact that the bill gives both sides a way to negotiate a compromise to move North Carolina past House Bill 2.

McGrady’s bills would “get us out of the bathroom business” by barring local governments from establishing access rules for public bathrooms. It would continue to exclude the LGBT community from the state nondiscrimination policy, but it would allow local governments to extend protections to them. However, opponents to local ordinances would be allowed to gather support to put the matter on the municipal or county ballot to decide whether the ordinance stays on the books.

“This will only pull us apart, not bring us together,” said Sen. Floyd McKissick, D-Durham, who called such referenda “divisive and polarizing.”

McGrady said the referendum provision is a piece of the puzzle he needs to put together to garner enough support to push his bill through the House. Take that away, he said, and he might lose more Republican votes than the Democratic votes he would pick up, dooming the bill in a floor vote.

“We want to get (House Bill 2) off the table,” he said. “It’s sucking the wind out of every other issue we’ve got out there – some pretty important ones.”

He put the onus on Democratic Gov. Roy Cooper to rally House Democrats around his proposal. Cooper has expressed opposition to the referendum provision.

“This is not a take-it-or-leave-it sort of thing,” McGrady said, “but you can’t negotiate with yourself, and right now, I haven’t heard from the governor.”

House Minority Leader Darren Jackson said his caucus has no interest in the referendum provision. At his own news conference, he held up a white board that said no more than four House Democrats support McGrady’s bill as written, while anywhere from 37 to 42 would back it if that provision were removed.

Moore, R-Cleveland, couldn’t be reached for comment Tuesday, but in a statement Monday, he said such ballot initiatives are “in no way a novel proposal,” noting they are part of municipal charters in Raleigh, Greensboro, Asheville and other cities.

“Nothing is on or off the table at this point,” McGrady said. “I’m not going to draw any lines in the sand.”