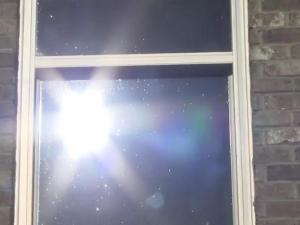 Raleigh, N.C. — Energy-efficient windows are sometimes required any time new ones are installed on homes, but some homeowners say the new windows are starting fires.

The windows are called Low E windows, and they can reflect sunlight that gets hot. Several years ago, WRAL’s 5 On Your Side reported a similar problem when the windows were blamed for melting siding and car parts.

State building codes were eventually changed, but the concerns are more serious this time.

Homeowner Patrick Heinzelman recently had to call the fire department to put out a fire that destroyed a bush and some of the surrounding landscape. Soon after, the same area caught fire again despite the ground being wet.

“The mulch, which has been watered down with a hose all night long, had the flame retardant powder from fire extinguishers, and with the fire department put their own stuff down, it was still catching back on fire,” Heinzelman said.

Since Heinzelman has lived in the new home less than a year, he wanted answers.

“I’m like, that was crazy, we had no idea how that happened, and as we’re standing here we could actually feel the heat from the beam,” Heinzelman said.

He said he never dreamed a window could be capable of starting a fire.

Heinzelman spent $800 to tint the window, but the reflection continues, and he fears for his family.

“I went out and bought for every room one of these insta-sprays or fire extinguishers,” Heinzelman said. “I had a couple in the house, but now every room has it just in case.”

“Had I not been home, this would have been a tremendous fire going back into the woods,” he said.