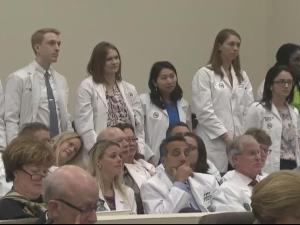 Raleigh, N.C. — Two different sets of eye doctors are battling over who should have the right to perform a certain set of surgeries, including two treatments for glaucoma patients that involve lasers.

Ophthalmologists are medical doctors who specialize in treating the eyes and performing eye surgeries. Optometrists don’t go to medical school but do get four years of specialized training in treating eye diseases and correcting vision.

Members of the two fields testified Wednesday at a state House Health Committee regarding House Bill 36, which would allow optometrists to perform three types of surgeries: removing skin tags from around the eyes and two procedures involving lasers. One of those laser treatments is used to relieve pressure in the eyeballs of glaucoma patients.

“I believe this is a very important bill, and I’m extraordinarily disturbed by it,” said Dr. Susan Burden, an ophthalmologist who teaches at the Wake Forest University School of Medicine and works for the Veterans Administration.

Burden said that optometrists who don’t got to medical school don’t have the training to recognize cancers or more complex problems that may initially look simple.

But proponents of the bill insist optometrists can do the procedures in question safely and give patients more access to eye care, particularly in rural areas where access to eye surgeons is limited.

“Our therapeutic options are mired in rules from 1977,” said James Fanelli, an optometrist practicing in Wilmington who is also an adjunct faculty member at Salus in Philadelphia.

Fanelli and others pointed to a record of success in other states, where optometrists have faced few, if any, complaints about their performance regarding those surgeries.

Although this specific debate over eye care is new to North Carolina, this kind of “scope of practice” legislation frequently provokes high-stakes battles at the General Assembly. Nurse practitioners, midwives, teeth-whitening operations and nurse anesthetists have all been a part of recent legislative debates.

As with other such battles, this one has played out in the campaign finance world. Since 2012, doctors on either side of the debate have given state lawmakers at least $345,362 in campaign donations, according to the Institute for Money in State Politics. That figure doesn’t count money spent on direct lobbying given in the first part of 2017 or not coded correctly in campaign finance data.

The arguments lobbed in the those other scope-of-practice debates also are similar to those brought out in the eye doctor debate. Proponents of allowing allied health professionals do more say widening their scope of practice would allow patients to have more access to the operations in question. They insist that their scope of training encompasses the procedures in question.

In this case, optometrists who presented before the committee Wednesday pointed out that schools of optometry are already training students on the procedures at the heart of the dispute and that Oklahoma, Louisiana and Kentucky already allow optometrists to perform them.

Lurking in the background is a debate over money. Dr. Galen Grayson, a medical doctor who sided with the optometrists, acknowledged the monetary stakes.

“Some ophthalmologists, including myself, will generate less revenue if optometrists are allowed to perform certain procedures,” Grayson said. “This will be countered by cost savings to patients, who will pay less in co-pays and deductibles, as well as savings to insurance companies and the state and federal governments.”

Representatives of the eye surgeons said money is the least of their concerns. Rather, they point to studies that suggest optometrists either might not perform the surgeries at issue as well or perform them too often.