‘This Is a Tough One’: State Considering Closing Durham Charter High School After Diploma Errors 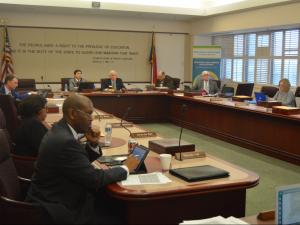 By Kelly Hinchcliffe and Sarah Krueger

Raleigh, N.C. — The State Board of Education will vote Thursday on whether a Durham charter high school should be closed for giving unearned diplomas to 40 percent of its graduates over the past eight years.

At least two board members signified during their meeting Wednesday that they will likely vote to close Kestrel Heights’ high school but allow the charter school to continue serving students in grades K-8. Other members expressed concerns about how the diploma errors occurred but did not share how they might vote.

“This boils down to an accountability issue for a school that was not following the rules,” said board member Becky Taylor, who said she is inclined to close the school. “This is a tough one.”

Board member Greg Alcorn said he also supports closing the high school and wondered how much money the school is spending to make sure the affected students are able to make up the credits they didn’t earn.

Board member Olivia Oxendine questioned whether the school broke the law.

“Something about this feels illegal,” she said.

The state board previously asked the Durham County District Attorney’s Office to determine whether a criminal investigation is warranted, but the DA’s office has not made a decision yet.

Kestrel Heights’ leaders say the problems stemmed from “systematic errors” by a counselor and two principals who are no longer employed at the school.

Executive Director Mark Tracy said his school has made substantial changes to make sure it will never happen again and said it was “not an issue of illegal activity.”

Glenna Boston, vice chair of Kestrel Heights’ board and parent of a fifth-grader at the school, said “it was frustrating at times” to listen to the state board’s discussion about her school on Wednesday. She disagreed with some of the information presented and said her school has tried to provide the state with as much information as possible since the diploma problems came to light last year.

“We have been completely transparent as a board. We have sent out information to the families. Transparency has been our goal in this whole process since the very beginning,” Boston said. “I still would not be involved with Kestrel if I did not believe 110 percent in Kestrel and their ability to educate my child as well as my friends’ children.”

Kestrel Heights supporters have ramped up their efforts in recent weeks to persuade the state board to keep their school open. They sent emails and started a Change.org petition, which has garnered nearly 700 signatures.

The state board was supposed to vote on the school’s fate last month but decided to delay the vote until this week so they could read the many emails they had received. Among the many emails from Kestrel Heights supporters was one from a member of the state Charter Schools Advisory Board, who decided to make his own appeal to the State Board of Education.

“Please do not cave to this parent & employee pressure,” advisory board member Alan Hawkes wrote on Jan. 26. “Parents and personnel should be grateful (the advisory board’s) recommendation was not more severe than it was.”

Hawkes and the rest of the Charter Schools Advisory Board voted unanimously to recommend closing Kestrel Heights High School, effective July 1, as punishment for the diploma debacle. They agreed that the school should still be allowed to serve students in grades K-8. Some members, including Hawkes, said the vote was one of the toughest they had ever made.

In an interview last month, Hawkes called the vote to recommend closing the high school “agonizing” but said it had to be done to show that the state is holding charter schools accountable.

“We heard from parents and teachers at Kestrel Heights, and they’re wailing and gnashing their teeth,” Hawkes said. “I’m sympathetic, but you still have to, with something that egregious, there have to be sanctions.”

Kestrel Heights alerted the state Office of Charter Schools last fall that it had given diplomas to students who didn’t earn them. The school’s new principal first discovered the problem last summer. School leaders investigated further and found that 160 of 399 students received diplomas in the past eight years without earning all of the proper credits.