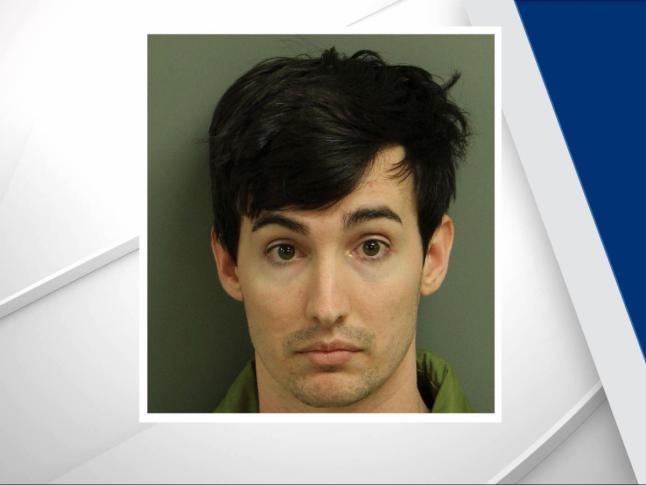 Raleigh, N.C. — A federal magistrate on Wednesday denied bond to a Cary man accused of making an online terror threat 10 days ago.

Garrett Asger Grimsley, 27, of 3116 Lakeside View Court, is charged with transmitting a threat in interstate commerce to injure another person.

Authorities said that Grimsley posted a public message on the messaging app Whisper on Feb. 19, stating “don’t go to Cary tomorrow” and mentioned non-Muslims who he said “have spit in our faces and trampled our rights.”

“Say your prayers, sleep and watch the news tomorrow. It will only be the beginning,” the message stated.

When federal agents raided his apartment, they found a red bucket with more than 300 rounds of ammunition being used to prop open a door. The ammunition was compatible with an AK-47 that was lying in the middle of the living room, authorities said, and agents also found a gun case and four empty 30-round magazines in a closet.

Grimsley’s passport and $2,000 in brand new $100 bills were on the top shelf of a cabinet, authorities said.

A search of his computer found that he had recently run Google searches of terror attacks in Paris and Brussels, Belgium, elementary school shootings and searches of Trinidad and Tobago and Canada, which government prosecutors contend were possible locations for Grimsley to flee.

When federal agents arrived at the apartment, authorities said, Grimsley was encrypting and deleting information on four hard drives connected to his desktop computer. The agents were able to stop the process, but at least one full hard drive and half of another one were lost, authorities said.

Defense attorneys argued that Grimsley’s online threat and memes were nothing but dark humor, and while they might be disturbing, it is a stretch to take them as credible terror threats. The AK-47, they said, was purchased years ago, and Grimsley doesn’t even know where the key to the trigger lock is.

The defense also noted that agents didn’t find a prayer rug or Quran in Grimsley’s apartment, had no evidence he had converted to Islam, ever visited a mosque or traveled to known terror states.

Grimsley’s parents, who both served in the Army at Fort Bragg, said they would be willing to watch over him if he were released on bond.

U.S. Magistrate Judge James Gates wasn’t persuaded by their arguments, noting that Grimsley has battled depression in the past and could pose a threat.

“The evidence is consistent with a plan to execute a terror attack and flee,” Gates said.