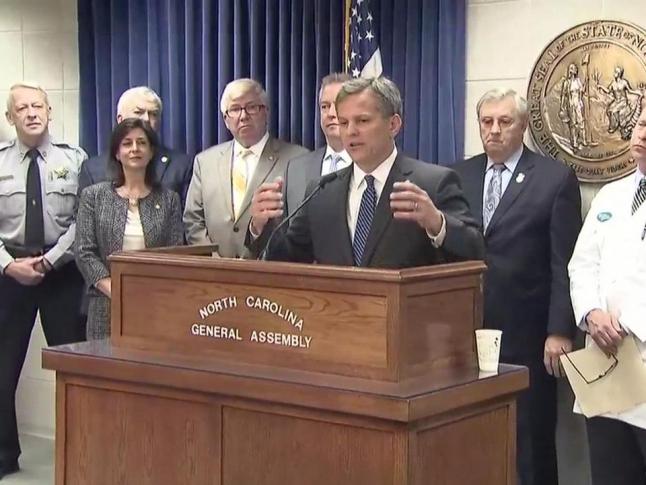 The “STOP” Act was filed Thursday in both the House and the Senate. It would add new requirements for doctors, dentists, veterinarians and pharmacists to track prescriptions for controlled substances in schedules II through V, including opioid pain medications, through the state’s Controlled Substances Reporting System database. Improper reporting would carry a civil penalty.

With very few exceptions, prescriptions for opioids would have to be submitted electronically rather than written by hand. Initial prescriptions could be for no more than a five-day supply.

The legislation includes $10 million in each of the next two years to increase community-based treatment and recovery services. It also widens the standing order for drugs to counteract an opioid overdose to include community groups, law enforcement agencies and local health departments.

The problem is rampant in North Carolina. Wilmington is ranked the No. 1 city in the U.S. for opioid abuse, according to Castlight Health, a San Francisco-based health care information company. Fayetteville, Jacksonville and Hickory are also in the top 20 nationally, and four people die every day in the state from a medication or drug overdose.

“The number of statewide opioid overdose deaths has grown by nearly 400 percent in seven years,” said Sen. Jim Davis, R-Macon. “Drug overdose is now the No. 1 cause of accidental death, surpassing vehicle crashes.”

Eight out of 10 heroin users started by using addictive painkillers, according to state statistics. Sponsors say lessening the quantity of those painkillers in public circulation should help reduce the number of people who become addicted.

Sen. Tom McInnis, R-Richmond, another Senate sponsor, has a personal stake in the proposal: He lost his 21-year-old son, Trenton Woods, to an overdose in 2007.

“It started because of an automobile accident where he broke a couple of bones. He was given a vial of these horrid, horrid addictive drugs, and he started a downhill spiral that ended up with the loss of his life,” McInnis said. “If you get these pills for any reason, you’re either going to hate the first five, or you’re going to love all 30 of them, and you’re going to seek out more. And the next thing, you’re not going to be able to get them, and the next thing is going to be heroin or some other bad drug.

“We’re going to make sure that our citizens are protected and that justice is brought to those that are bringing these drugs illegally into the community,” McInnis said, “and also to help those who are addicted through no fault of their own other than just going to a doctor or a dentist and getting too much of these addictive drugs.”

Rep. Greg Murphy, R-Pitt, a practicing neurosurgeon in Greenville, said five of his children’s friends have died of overdoses. While doctors don’t want more regulations, he said, the medical community stands behind the effort in this case.

“Our goal here is to save lives, to save families, to save businesses,” Murphy said. “We as health care professionals commit fully and completely to the eradication of this terrible epidemic.

“The time is now, and today is the day when the battle begins,” he added.

The proposal would also add new emphasis on assisted diversion programs that send drug users who are not dealers and haven’t committed other crimes into treatment programs instead of jails.

“For people who profit off of people’s misery and addiction, they must face the toughest sanctions that our law enforcement can levy on them,” Stein said. “But (for) most folks, addiction is an illness, and the best way to treat illness is to treat the sickness and not to incarcerate the person.”