The Trump administration has been vigorous in wanting to cut regulations. That’s not always a bad thing. But this suggested change really caught my eye.

President Trump has signed a memorandum which clears the way to eliminate the fiduciary rule for investment brokers. The fiduciary rule may sound like something boring but every person saving for retirement needs to know about it.

Under the fiduciary rule your investment advisor would be required to act in your best interest to manage your investments well rather than maximizing their income for themselves.

It sure seems like a commonsense rule and one that is in support of the little guy.

The investment industry wants the rule to go away so they are not subject to lawsuits from not investing money well on behalf of their clients.

Consumers need this rule to help maximize their tough fought investments and make them grow as much as possible so when they retire they have sufficient money to live on.

This concern about being able to afford retirement is not unwarranted. I was talking to a assisted living administrator recently and they mentioned the internal discussion in the parent company was what the future looked like as more seniors hit the need for assisted living without the ability to pay for it.

The future is uncertain for people set to retire in the future. If Social Security is privatized and investment advisors have no fiduciary duty to act in the best interest of the client, then who loses? My opinion is Mr. and Mrs Joe Main Street will take the financial hit and retire poorer.

Some companies, like Merrill Lynch had embraced the new rules that were supposed to go into effect in April. Other companies have issued statements like that from LPL Financial, “We also believe that a consistent approach to disclosure, compensation and mitigation of conflicts of interest is the right path forward for our industry.” – Source

According to Financial Advisor IQ, “The DOL [Department of Labor] fiduciary rule was scheduled to be phased in starting April 10 but might now be delayed indefinitely, pending further review. The rule expanded the definition of “investment advice fiduciary” under the Employee Retirement Income Security Act of 1974 to bind all financial service workers, including stockbrokers and insurance agents, who provide advice on retirement accounts to the ethical and legal status of fiduciaries.”

The implementation of the fiduciary rule is a big deal for small town America hardworking investors. “A 2015 Obama administration study concluded that “conflicted investment advice” has been reducing the return on retirement savings by around one percentage point, costing ordinary Americans around $ 17 billion each year. Where has that $ 17 billion been going? Largely into the pockets of various financial-industry players.” – Source

So What Can You Do Now?

As with everything else in this modern world the only person looking out for you, is you. So what you can do is have an open conversation with your investment advisor or investment company and ask them for their position on acting in your best interest. Then, ask them to show you where it says that in your client agreement.

The desire for investment advisors to lookout for the best interest of their clients is not liberal overreach, it’s just what every person expects. Afterall, who wants to invest their hard earned money with someone who is going to line their pockets will making you less? 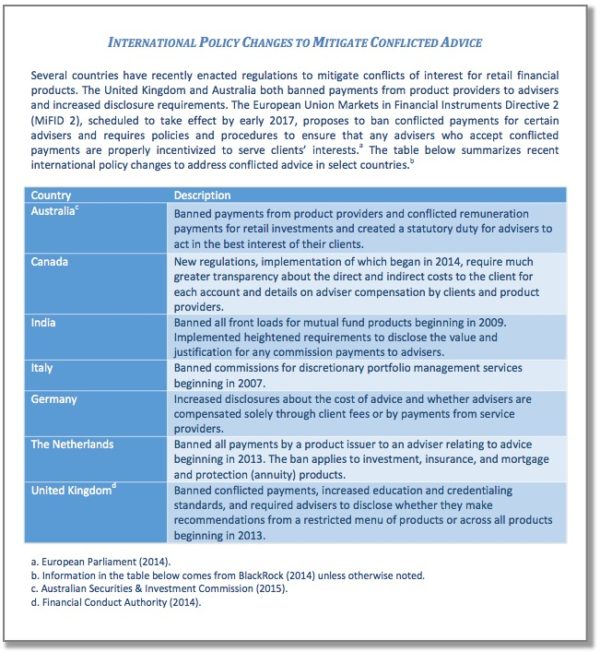 To make the potential actions on the elimination of the fiduciary rule even more perplexing is the published remarks for an executive order that President Trump never signed. The White House says:

“For Immediate Release
February 03, 2017
Remarks by President Trump at Signing of Executive Order on Fiduciary Rule

THE PRESIDENT: Today we’re signing core principles for regulating the United States financial system. It doesn’t get much better than that, right?

THE PRESIDENT: Why don’t you explain this.

MS. WAGNER: What we’re doing is we are returning to the American people, low- and middle- income investors, and retirees, their control of their own retirement savings. This is about Main Street, and it’s been a labor of love for me for over four years as chairman. And I have had — this is a big day, a big moment for Americans. (Inaudible.)

THE PRESIDENT: And she means that so much.

THE PRESIDENT: Chairman, I think we should hand the pen to this very special person.

THE PRESIDENT: Thank you.

Q Mr. President, do you have anything to say about the decision to make the Iran — should they be expecting more?

THE PRESIDENT: They’re not behaving.

Let’s just say for a moment that the White House published this event erroneously and what was actually signed was something other than an executive order. I’m still stuck on how the elimination of rules to act in the best interest of the average investor can even begin to match the statement, “What we’re doing is we are returning to the American people, low- and middle- income investors, and retirees, their control of their own retirement savings.”

After a Long Pause, 30 Million Student Borrowers Will Begin Defaulting

Last year, in response to the COVID pandemic, the Department of Education pressed the pause …