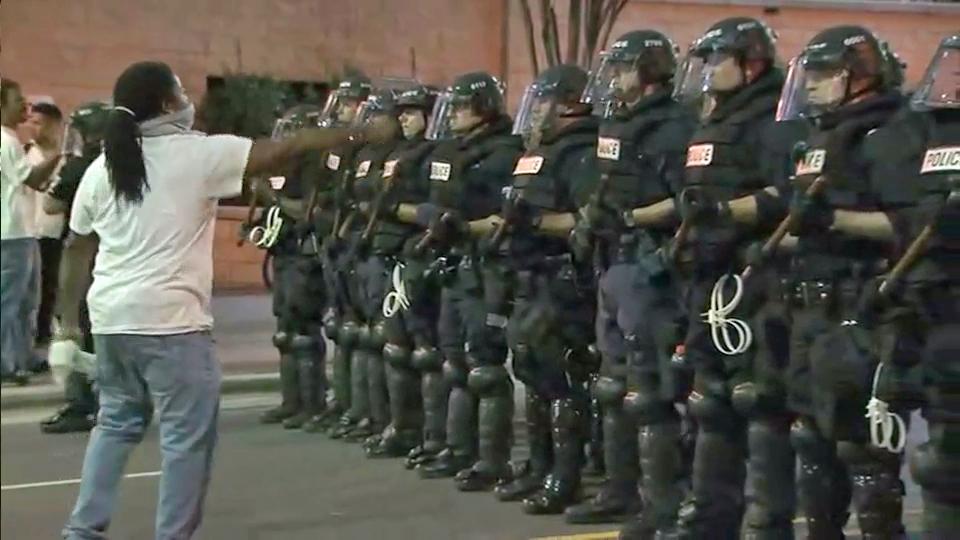 Raleigh, N.C. — Four Republican state lawmakers are calling for the creation of a felony offense for what they call “economic terrorism.”

House Bill 249, which was filed Thursday, defines the term as committing a crime with the intent to intimidate people or influence public policy and that crime impedes the normal course of a business or a government agency, resulting in the loss of at least $1,000. Such crimes include trespassing or blocking streets.

Under the proposal, anyone found guilty of economic terrorism would face four months to more than two years in prison, could be sued for damages of at least $50,000 and could be held liable for the costs of police and other public safety personnel who respond to the disturbance.

“I think it’s the first core responsibility of government to protect the safety and security of citizens, and when you see that safety and security being impacted in a negative way, it’s up to us to try to do something to correct that,” Torbett said.

Critics of the bill say, however, that it’s so broadly written that it could apply to events such as the “Moral Monday” protests at the Legislative Building, where hundreds of people have been charged with trespassing in recent years.

Sarah Gillooly, policy director of the state chapter of the American Civil Liberties Union, said the legislation infringes on constitutional rights of assembly and free speech.

“This bill is part of an alarming trend we’ve seen in North Carolina and across the nation to put a chilling effect on people’s First Amendment rights,” Gillooly said.

At least eight other states have similar proposals under review, although none has become law yet.

In North Dakota, for example, where protestors camped out for months trying to stop construction on the Dakota Access Pipeline, lawmakers are considering a bill that would impose a five-year prison sentence on protesters while protecting any driver who accidentally injures or kills a protestor blocking traffic on a roadway.

Torbett said his bill isn’t aimed at peaceful events. Rather, he said, there’s a rising level of violence at public protests.

“If it’s peaceful, we’re not after peaceful. We’re after illegal,” he said. “If we can put something on the books that might just perhaps to keep that from escalating, then the citizens at large and the government they represent are safer.”

Gillooly noted North Carolina already has laws on its books against vandalism, rioting and trespassing, so the new proposal isn’t needed.

“There’s a real difference between vandalizing a business and protesting in front of a business,” she said. “Fundamentally, the Constitution protects our right. The U.S. Supreme Court has protected our right to be in the street and to criticize our government.”