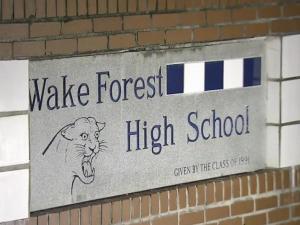 Wake Forest, N.C. — A video posted on social media has gained a lot of attention for its undertones of racial bullying in a local high school.

The video, posted to Instagram on Friday, has people taking online and has students and parents concerned that the punishment for the students involved may not have been distributed evenly.

The circumstances surrounding the incident or what led to the altercation in the video are uncertain, but one parent said the school acknowledges something happened between two students and they’re addressing it.

“School administrators became aware of the video posting shortly after it was posted Friday and we are continuing to investigate the situation,” the message said.

The message was the acknowledgement Pernell said she’d hoped to receive after learning of the video’s existence.

“I just want to know for sure that somebody is really looking into this,” Pernell said.

The video was posted to Instagram by someone identifying himself as a student. In the video, a student is seen pulling another student to the ground twice. A teacher steps in and the video ends shortly after that.

Students and parents have commented, saying the student seen pulling the other student down was suspended, but they believe it was unfair because he had been harassed with racial slurs and threats.

A petition circulating online defends the student who pulled the other to the ground and demands alleged bullying and racism be addressed by the school.

“Watching the video is damaging, but reading the petition, there are, like I said, over 1,100 kids who have signed this petition. And then when you go in and read some of the comments that are hate filled, there are racial slurs in the comment section,” Pernell said.

Pernell said she does not know the boys in the video, nor is she certain that claims of harassment prior to the incident are true, but she wants answers from the school.

Until then, she is left with the voice message that leaves more questions than answers.

A spokesperson with Wake County Schools did not return a request for comment.