Monday night was the first “Fiber to the Forest” meeting at the Renaissance Center. Details on the service were shared to us average folks for the first time.

For those that are unaware and living under an internet rock, the Town of Wake Forest has embraced bringing gigabit (1,000 megabytes per second upload and download) to little old Wake Forest. Take that Cary. Ha! Wake Forest will be the second town in North Carolina to have this kind of blazing speed. Wilson was the first and goodness knows letting Wilson have a win every now and then is good for them.

For the past articles on this blazing fast internet service, click here.

The tentative plans are to open a retail space in downtown Wake Forest were locals can come to try the blazing fast service. Some will drool and some will complain about the cost and availability.

The details you want to know are that there will be a $225 installation fee which covers the drilling of the 1/2 inch conduit from the road to your house. Eligible neighborhoods will need to meet a 30% adoption rate to be eligible for this state-of-the-art service.

RST is copying the Google Fiber process that was rolled out in other fiberhoods like Kansas City.

For those that live central enough in the Town of Wake Forest there will be some sort of super fast internet access via a wireless connection. If you can receive the wireless signal where you live there will be no sign-up fee since you won’t need to get drilled.

But wireless customers will need a wireless router that receives 802.11ac signals. I understand that particular piece of tech costs around $170 to $200. Just proves there is no free lunch but there is fast internet in the future for some of us.

Dan Limerick, the CEO of the provider, RST Fiber Optic Networks, shared some details. “Our drills are in the ground right now,” he said. The contractors are using directional drilling techniques to go down ten feet and then setoff underground. That approach is working well Limerick said.

He claims homes connected to the fiber will go up in value $5,000 to $7,000 due to demand for the service. Nice claim but I’m not sure anyone has that crystal ball.

To get in the queue for this gigabit internet, go to WakeForestFiber.com and register if you have not already.

RST says it will offer Wake Forest subscribers, gigabit, 1,000 mbps internet service for $99.95 per month. Service at 50 mbps up and down will be $59.95 per month. I’d spring the extra $40 per month and get service 20 times faster. They will also offer phone service for $34.95 per month for unlimited service. Television service will be available as well. Details to come later.

As the service advances, people will be able to purchase high-definition cameras to monitor their homes or businesses. A Star Trek like transporter would be a welcome addition as well.

Business service via RST will bruise your wallet. I would suggest you should not look at the picture below if you are stressed at the moment. 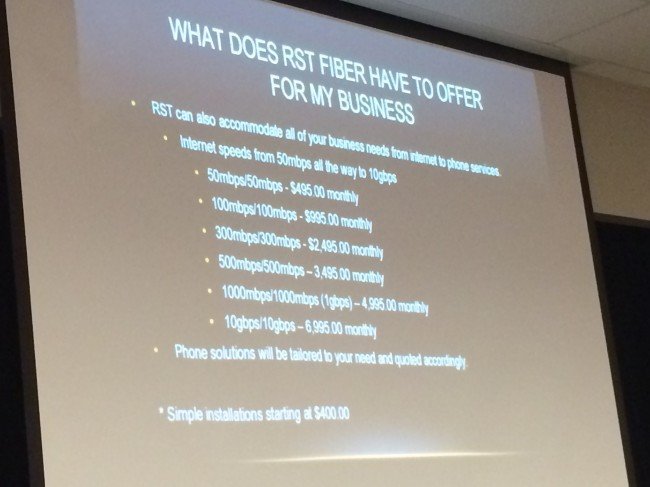 Limerick says he’s proud Wake Forest will be the showcase for super fast internet service. He even thinks Wake Forest should place an advertisement in the Silicon Valley News to get some of those entrepreneurial beatniks to fly over here and setup shop. We hope they bring the sports cars so we can get some more cool rides to look at during the local car shows.

People in attendance at the meeting had some “interesting” questions. One woman wanted to know if the things Snowden and the NSA were talking about would create security risks with nosy Nellies trying to snoop on your internet connection using this fast service. Now that’s a question I didn’t see coming.

Residents who do not live within the Town will be eligible for service but not at first. Limerick says his company, RST, will focus first on the core of the Town of Wake Forest and Wake County residents will be eligible before nearby Franklin County residents. But people outside of the Town limits will get access, it will take some time. But as one lady said, “I want you bad.” Now that’s what you want to hear. Limerick said he’s excited to be here so I guess it’s all working out.

One person in attendance asked if there was information they could share with neighbors to convince them to get onboard. Excellent question. It drew the “good question” head tilt response. I would imagine some sort of stuff will be available at sometime in the future.

Some dude was concerned about the viability of the private company, RST, and if they would go bust at some point in the future. Again, have to find that damn crystal ball. It will be entirely possible RST, or any company, can go out of business. Companies like Time Warner and Google are not in danger of going out of business, but those companies are not walking into Wake Forest to offer this kind of bleeding-edge internet service. As a disclaimer, Time Warner is in the process of being acquired by Comcast so I guess Time Warner could vanish and we’ll soon be complaining about Comcast.