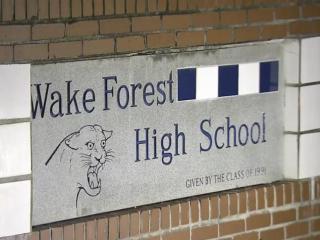 Wake Forest, N.C. — Students at Wake Forest High School staged sit-ins and protests Monday in support of a classmate who was suspended after a video surfaced of the teen pulling another student to the ground.

The video, posted to Instagram on Friday, shows Micah Speed, a black student, pull a white student to the ground before a teacher steps in to break up the altercation.

Wake County district officials say they are investigating, but many students believe Speed was wrongly punished.

Speed said at the time of the altercation, he’d been the target of racial slurs and derogatory comments for two months.

“Actually, that day he told me I should name my kids crack head and convict because that’s what they would grow up to be,” he said.

Yolanda Speed, Micah’s mother, said she does not condone fighting, but wants teachers and administrators to be held accountable.

“People are under the assumption that it was ok for him to put his hands on that young man. It was never ok,” Yolanda Speed said. “But you have to understand that there is always going to be a reaction to an action.”

A petition circulating online defends the student who pulled the other to the ground and demands alleged bullying and racism be addressed by the school.