Fight With Duke Energy Over Tree Is Rooted in Property Rights 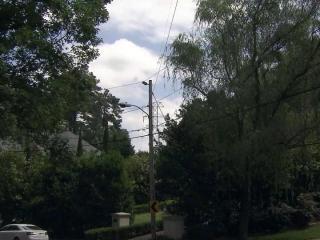 Raleigh, N.C. — A Raleigh man is taking on Duke Energy over a tree in his front yard that the company said must be cut down to protect power lines.

It has been about two years since Duke Energy sued John Kane to cut down a willow tree in his front yard.

“It has been incredibly frustrating,” Kane said.

“Our goal is to ultimately ensure the safety of the power line, to ensure service remains reliable for all of our customers,” said Jeff Brooks with Duke Energy.

Like the tree, Kane would not move, saying an easement did not give Duke Energy the right to remove it. It remains on the property because a judge denied an injunction request from the utility giant.

Duke and Kane are now in mediation. Duke officials will not comment on the process, but Kane said it is not going well. He said there have been proposals to prune the tree and to sell Duke Energy an easement and possibly give the money to charity.

“If we make a special arrangement for that customer, it’s not fair for another customer whose tree we may have to remove,” Brooks said.

Kane said the tree is beautiful, especially when it’s in full bloom, but the argument is no longer just about the tree- it’s about property rights.

“It has to do with the fact that this is private property that my wife and I bought,” he said. “This is my property and my tree and you can’t have it just because you’d like it.”

According to Kane, Duke Energy also made a proposal. They would cut the tree down, remove the stump and limbs and plant something else in its place.

Kane had a few conditions for that deal.

“We will do that if you agree to do the same for every residential customer across the state,” he said.

If Duke Energy officials broke that promise, the proposal would require Duke to pay a fine. That deal didn’t pan out.

“We want to do whatever we can to resolve the situation amicably, but at the end of the day, we have an obligation to supply service for our customers,” Brooks said.

Kane said a tree in a neighbor’s yard is also disputed and he believes Duke Energy is trying to avoid setting a precedent in the cases.

The argument could end up back in court.