I’d love to tell you this is some cruel twisted joke of an article, but sadly it’s not and there is no way for me to spin this in some funny, jovial way so we are just going to have to face this head-on.

Normally I’d avoid such downer news but when it comes to hurting animals or just plain old animal stupidity, well, that just pisses me off.

The Town of Wake Forest is reporting a woman left two dogs in her car while she shopped for three hours at Walmart and the dogs died from the heat.

Hopefully no people walked past the dogs stuck in the hot car and ignored them. Sad. But it is nice the Wake Forest Police Department made the policy known they take such situations seriously.

Did you do it? I’m waiting, put it in your phone and if you see any animals locked in a car this summer in Wake Forest, call the WFPD. We can’t screw around with this because if we don’t call, animals will die a cruel death.

From the Town press release:

“A Franklinton woman was arrested and charged with animal cruelty earlier today after two dogs died in her vehicle.

At approximately 11:30 a.m. Wake Forest police responded to a call concerning two dead dogs inside an unattended vehicle in the Walmart parking lot, 2114 S. Main St. Police learned the dogs’ owner, Jennifer King, 34, left the dogs for nearly three hours inside her car while she shopped. 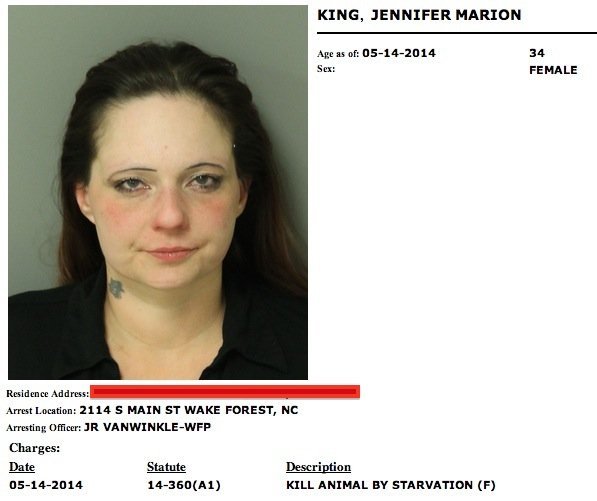 Although the outside temperature this morning was approximately 80 degrees, the reported temperature inside the woman’s vehicle was over 120.

King was transported to the Wake County Detention Center.

The following tips are provided for pet owners and for those who see animals left unattended in vehicles:

If you see a pet inside a vehicle, call the Wake Forest Police Department at 919-554-6150. Officers will attempt to track down the pet owner but will break a window if they find an animal is in distress.

Do not leave an animal in a hot car even with the air conditioner running. It won’t help to cool the pet off and owners are putting themselves at risk of someone else taking off with their car and their pet.”