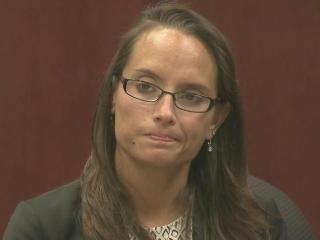 Raleigh, N.C. — A former Wake County prosecutor withheld evidence from defense attorneys in a 2014 robbery case because she was upset over her father’s kidnapping months earlier, her attorney said Wednesday.

Colleen Janssen, who resigned as assistant district attorney last July amid questions about her actions in the case, faces possible discipline for violating the code of professional conduct for attorneys.

“There’s no question Ms. Janssen made mistakes in this case,” her attorney, Joe Zeszotarski, said in his opening statement. “The question, of course, is why did this happen? How did it happen?”

The case in question was the prosecution of Barshiri Sandy and Henry Surpris, who were charged with robbing Marcus Smith in April 2013.

Sandy and Surpris confronted Smith in his garage and exchanged gunfire with him before fleeing the scene, according to court records. Smith testified at trial in October 2014 that Sandy and Surpris robbed him of $1,153 in cash and a ring, while the two defendants testified that Smith was a drug dealer who hadn’t delivered some marijuana they had bought.

Smith denied any involvement with drugs, and Janssen repeatedly said during testimony and in her closing argument that there was no evidence to back up Sandy’s and Surpris’ claims, according to court records.

But emails that came to light during a subsequent federal prosecution of Smith on drug trafficking charges show Janssen used a personal email account to communicate with a Raleigh police investigator before Sandy’s and Surpris’ trial about a raid on a drug house linked to Smith, asking him to delay pressing charges against Smith.

The North Carolina Court of Appeals ruled last June that Janssen violated the defendants’ right to a fair trial by not informing their attorneys of the pending case against Smith, and the judges overturned the men’s convictions. Wake County District Attorney Lorrin Freeman then dropped the charges against them.

“She engaged in misrepresentation or deceit,” Patrick Murphy, deputy counsel for the North Carolina State Bar, said of Janssen in his opening statement Wednesday. “It’s deliberate. It’s thought out. It occurs over the course of the case.”

“Colleen Janssen never set out to break the rules,” Zeszotarski said, noting that she was still reeling over her father’s kidnapping six months before she prosecuted Sandy and Surpris.

Kelvin Melton, whom Janssen had prosecuted in 2012, used a cellphone smuggled into a state prison to order members of the Bloods street gang to kidnap her, but the crew went to the wrong address and grabbed her father instead. The FBI monitored the phone conversations between Melton and his subordinates to pinpoint Frank Janssen’s location and rescued him from an Atlanta apartment five days after he was taken from his Wake Forest home.

Melton is now serving a life sentence in a federal super-max prison in Colorado, and several of his associates have been sentenced to 20 to 50 years in prison for their roles in the abduction.

Zeszotarski said Colleen Janssen felt responsible for what happened to her father, which the attorney called “a catastrophic event” that led to revised safety and security procedures for Wake County prosecutors and others.

“Looking back, she knows she wasn’t operating at her best” when she returned to work after her father was rescued, Zeszotarski said. “She put on a brave face and tried to get back in the swing of things.

“This was an isolated instance in an otherwise exemplary career,” he said.