The Town of Wake Forest, whom I have a town crush on, has adopted a new logo and name for the Town parks program.

According to the press release below the parks department has become multifaceted by being cultural, broad spectrum, and dynamic. Kind of sounds like the modern antibiotic approach to town park programs.

Thankfully the Town of Wake Forest has people of better intellect and who are much more creative than us. They say the new logo took a three-month creative process. We’d be history after 30 minutes or when the first squirrel ran by. Squirrel!

As you will read below in the Town press release, the Town wanted to appear to be progressive, “We believe we are sending a message that we are a progressive organization that is excited about serving our community, said PRCR Director Ruben Wall.”

So taking that challenge on, we think our logo, which took ten minutes (and it shows) would have done the trick but sadly our proposed park department logo was not selected. Still crushed over that one.

Now our logo has snow-capped mountains in it because it’s a feature we’d like the Town to consider adding in the budget for next year. If we had some mountains it would be really nice. We’ve got lakes, woods, trails, and probably a bear or two wandering around. We’ve got everything but a mountain. Let’s add a couple.

We came up with the “Kick Your Ass” slogan after carefully considering that seemingly all Wake Forest parks encourage some type of activity and exercise. If you did all the activities available from our wonderful parks department, it would actually kick your ass.

Not to be completely left out with nothing to show for our effort, we have decided to make our ten minute logo available on shirts for those not afraid to wear a little orange ass on their chest. Click here to get your WFN Park shirt.

Help support the Wake Forest News by purchasing a shirt, or not.

Say “so long” to the diamond. After nearly 10 years as the symbol for the town’s parks and recreation department, the diamond-shaped logo is being shown the door.

Underscoring its impressive offering of cultural programming, the Wake Forest Parks and Recreation Department is now officially using the name ‘Parks, Recreation & Cultural Resources Department.’ In an effort to formally introduce its new name, the PRCR Department unveiled a bold and dynamic new logo this afternoon during a special ceremony at the Wake Forest Renaissance Centre. 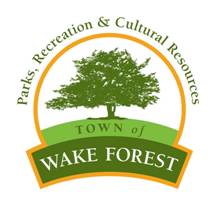 Created by the town’s Communications Department, the new logo was the result of a three-month creative process that incorporated staff input, research of the graphic identities of similar organizations and several rounds of twea[r]king.

The final product is clean and green and embodies a progressive department that embraces change.

From the outset staff concluded the revamped logo would need to cover a broad spectrum as the Parks, Recreation & Cultural Resources Department (PRCR) Department represents different things to different people. It was also agreed the logo would align with the town’s brand which features the ‘town tree.’ Designed to represent Wake Forest’s natural beauty and environmentally-friendly approach, the town’s logo was modeled after a cedar of Lebanon tree located at the intersection of Front Street and North Avenue across from the Southeastern Baptist Theological Seminary.

PRCR plans to use a phased approach that will transition its new logo into use over time. The fresh logo will appear immediately on the town’s website, on staff’s email signatures, in newly printed materials and selected promotional items. However, plans call for inserting the new logo on items such as stationery, signage and uniforms more gradually as those items are reprinted or replaced. In addition, an update of park and greenway signs is in the works and will be rolled out in the near future.

The new logo will be featured prominently in the next edition of RecConnect, PRCR’s program guide, which will be redesigned with a new, easy-to-read layout. The newly designed guide will be available in mid-July.

“We’re very pleased with our dynamic new logo and our bold new look,” said PRCR Director Ruben Wall. “We believe we are sending a message that we are a progressive organization that is excited about serving our community.”