The Wake Forest Renaissance Centre has got something going on that parents with prepubescent kids may want to participate in. Or even parents who are kids at heart themselves should consider attending.

Since the show is about “Ugg Bugs” it must be some slant on the popular Ugg boots all the cool people were wearing last year. I think that trend has passed but then again what the hell do we know about fashion.

At the very least the Ugg boot trend escaped us since it seemed it really caught fire in California and appeared to neutralize that part of the brain that normally regulates the heat of your feet. Ugg boots in hot weather, ugg. Your feet might look cool, but they are not cool. Nothing says hip like stinky feet.

It is unclear exactly what the show is about judging from the photo sent out. Our best guess is it appears to be something about a crazed lady with heartburn in a night shirt who befriends two bugs with intestinal cramps who hope it does not turn out to be some mutated form of diarrhea. Now that would be a truly shitty show. Ba-Dum-Bump. 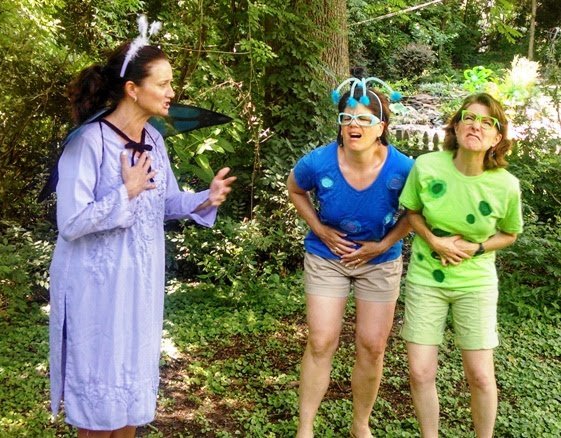 The Forest Moon Theater, who does fun things, actually describes the performance by saying it is the story of Spammy and Jean – two loud-mouthed bugs that are up to no good. They don’t realize that their thoughtless words pack a poisonous sting until it’s almost too late. Then a beautiful stranger pays them a visit and teaches them a valuable lesson in kindness the bugs won’t soon forget.

Who knows, maybe that lesson is our imagined case of bugrhea or a really bad case of bug farts. We all know kids love farts.

The Forest Moon Theatre is the handiwork of Beth Martin, Jennifer Schulz and Mitzi Bissette who create original and innovative children’s plays using literature, improvisation and pure interactive fun where children are cast right out of the audience into the show! No two shows are ever the same and adults have as much fun as the kids.

These shows are geared to young children ages 3-7. Tickets are $5 per person and can be purchased in advance or at the Parks and Recreation window in the lobby of the Wake Forest Town Hall, 301 S. Brooks St. On the day of the event, tickets may also be purchased at the door.