On Wednesday evening just before 9 PM an accident occurred on I-540 eastbound, near Ray Road. A passenger car plowed into the back of a truck in trouble.

Both Durham Highway Fire Department and Bay Leaf Fire Department had units on the scene to deal with the accident and the ensuing traffic mess as all I-540 traffic funneled down to one lane on the eastbound side. 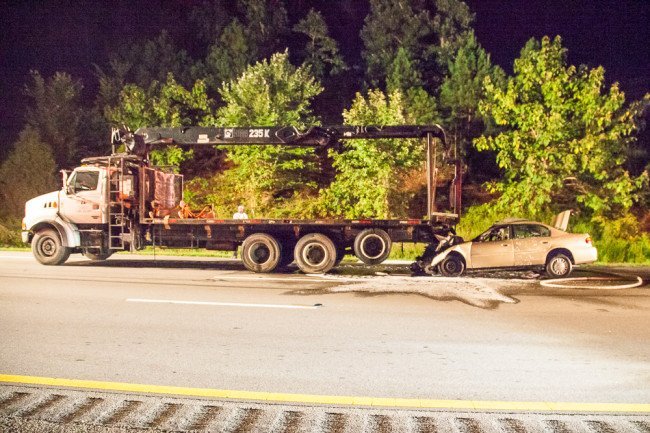 The passenger of the truck said they were having engine problems and pulling to the shoulder of the road as they were struck. He said they had just put their flashers on as cars rapidly approached them from behind. Two cars went around. One car didn’t.

According to another witness on the scene the truck did not have its light on at the time of the accident.

After striking the truck, the car caught on fire. The fire was quickly extinguished when the fire departments arrived. It appeared Durham Highway Fire Department Engine 1 was the unit primarily responsible for putting the fire out.

All occupants escaped the passenger car and it is believed nobody was seriously injured.