I get hit up all the time with book announcements. Frankly, there is no way I have time to read and review these things. So here is the information I received and you can do with it what you want. It was either post it here or delete it.

The author, Jamie Baywood, wrote, “I’m an American travel writer currently living in Scotland. My book “Getting Rooted in New Zealand” is a funny travel memoir about my time in New Zealand. I’ve attached a information about my book. I’ve had book talks at numerous libraries, book festivals and book clubs throughout the UK. 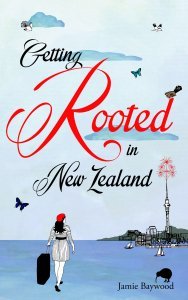 Craving change and lacking logic, at 26, Jamie, a cute and quirky Californian, impulsively moves to New Zealand to avoid dating after reading that the country’s population has 100,000 fewer men. In her journal, she captures a hysterically honest look at herself, her past and her new wonderfully weird world filled with curious characters and slapstick situations in unbelievably bizarre jobs. It takes a zany jaunt to the end of the Earth and a serendipitous meeting with a fellow traveler before Jamie learns what it really means to get rooted.

About the author Jamie Baywood:

Jamie Baywood grew up in Petaluma, California. In 2010, she made the most impulsive decision of her life by moving to New Zealand. Getting Rooted in New Zealand is her first book about her experiences living there. Jamie is now married and living happily ever after in the United Kingdom. She is working on her second book.

Getting Rooted in New Zealand is available in paperback and ebook on Amazon:  http://www.amazon.com/dp/1482601907