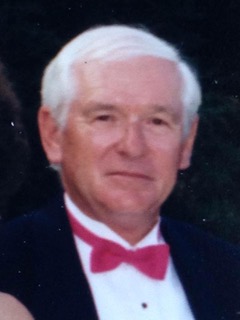 Bob was born January 13, 1935 in Providence, RI to John and Regina (Durda) Sokoloski. He graduated from Cumberland High School in 1952 and from the Bryant University in 1954. While in college Bob was a member of Alpha Theta Chi. On October 27, 1956, he married the former Mary Seliga in Valley Falls, RI in 1956. Bob owned Newport Concrete Form Company for over 50 years, and it was known as one of the most successful foundation companies in the New England Region. He was an avid pistol and clay target shooter and a member of the Cumberland Beagle Club, where he was club champion in trap competition for 12 years in a row. He spent most of his winters in Cape Coral, Florida where he lived on the water and spent much of his time boating on his beloved Donzi and shooting trap and skeet at Hansen’s Gun club. Bob moved to Wake Forest, NC 5 years ago, and joined the Charlie Brown Gun club where he enjoyed shooting and friendships with many of the members. He also enjoyed reading, watching his New England Patriots win 5 Superbowl Championships, drinking vodka tonics and spending time with his children and grandchildren.

Bob is survived by his three sons and two daughters, Robert (Bob) Jr. and his wife, Paula (Jackvony) of Foster, RI, David and his wife, Laurie (Lucena) of Uxbridge, Massachusetts, and Steven Sokoloski of Chepachet, RI, Debra Bailey and her husband, Keith of North Kingstown, RI and Donna Ballou and her husband, Mike of Wake Forest NC., RI. Bob also loved and enjoyed his 10 grandchildren, Shawn, Alex, Nicholas, John and Hollie Sokoloski, Dominique and Michele Bailey, Rachel and Haley Ballou, and Danielle Faucher.

He was preceded in death by his parents, John and Regina, his great granddaughter Lilliana Noel Carr and his wife Mary (Seliga) Sokoloski in 2013.