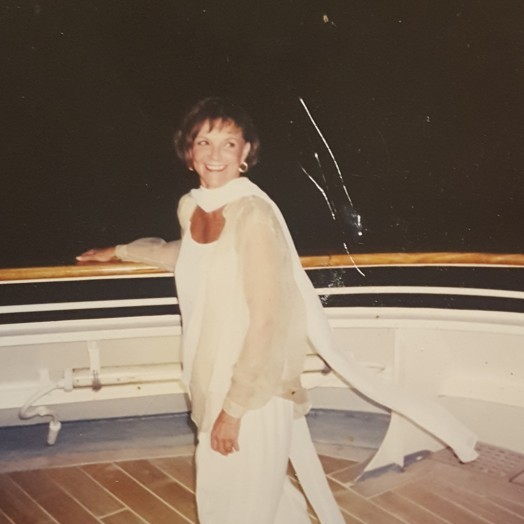 Joan Frances (Greer) Heffernan, born on September 21, 1934 in Covington, Tennessee, passed away at age 84 on June 29, 2018 in Raleigh, North Carolina. Her parents, the late Doris Dawson Fumbanks Greer and the late Felix Edgar Greer as well as her brother, the late Felix Edgar Greer, Jr. preceded her in death.
She graduated Byars-Hall High School in Covington, Tennessee in 1951 where they voted her Best Dressed and Most Beautiful. She was Queen of the Strawberry Festival in the 1950’s and attended Gulf Park College in Biloxi, MS in 1954. She graduated from Memphis State University (now University of Memphis) with a bachelor’s degree in business and special education and master’s degree in special education. Much of her life was devoted to the field of education starting with a strong commitment in the 1960’s to prepare schools for racial integration. She began working for the Memphis City Public Schools as one of the first teachers under the new national special education law in the 70’s and for ten years worked in and developed some of the most cutting edge special education services of the time. In 1984, she became the Educational Director at Charter Lakeside Hospital and began running an educational therapy business called Academics Plus (A+) in Memphis, TN. Joan was often sought after as an educational expert for television and radio interviews and stories across the state of Tennessee. Throughout her professional career, Joan also kept active in the fashion and beauty realm with various modeling, clothing, and cosmetic oriented jobs and experiences with various department stores, Origins, and Chico’s.
She joined the Episcopal Church as an adult and became an active member of every church she joined including St. Matthews in Covington, TN; St. Philips in Memphis, TN; St. Luke’s in Hilton Head, SC and The Falls Church in Falls Church, VA.
Joan has always been known for her beauty and brains. She enjoyed entertaining family and friends, dancing, walking on the beach and spending time with her children and grandchildren. She loved people and “never met a stranger” as her mother was fond of saying. Joan was an avid traveler and went to Greece, Turkey, Italy, Australia, and spend wonderful hours with friends in New York, California and Hawaii. Over the years, she has kept in close contact with many of her childhood friends. Joan loved spending time and staying in touch with her many cousins and their children and grandchildren.
After retiring from the education field, Joan began a second business called Redicare in Covington, TN providing caregiving services to people in their homes. She also volunteered as a hospice care provider.
In 2000, she married the late George Heffernan and moved to Hilton Head Island, SC where she lived an active life tutoring children, taking part in various arts and theatre endeavors, and volunteered in St. Luke’s bookstore and thrift store.
During her final years, she lived at Elmcroft assisted living in Raleigh, NC near her son and grandchildren. The staff at Elmcroft loved her lively spirit and elegant style and will miss her greatly. She often expressed her appreciation for their devoted support and loving care.
During her first marriage to the late Raymond Wayne Moore she had four children. She was preceded in death by her daughter, Meredith Greer Moore and is survived by her sons, Raymond Wayne Moore, Jr. and William Felix Moore; daughter, Frances Elizabeth Moore; and grandchildren, Peyton Banks Moore and Caleigh Meredith Moore. She is also survived by Ray's wife, Melissa Prandi Moore, and many close relatives and friends. She is the widow of the late George Heffernan of Hilton Head Island, South Carolina.
In lieu of flowers, memorials can be sent to: St. Matthew's Episcopal Church | Covington, Tennessee, Transitions LifeCare Hospice Home, Raleigh, North Carolina, or another preferred charitable organization.
Bright Funeral Home & Cremation Center is handling arrangements, 405 South Main Street, Wake Forest, (919) 556-5811 and Maley-Yarbrough Funeral Home in Covington at 1701 Highway 51 S | Covington, TN 38019 | Tel: 1-901-476-9778
A service of Bright Funeral Home & Cremation Center, Wake Forest, NC
(919)556-5811