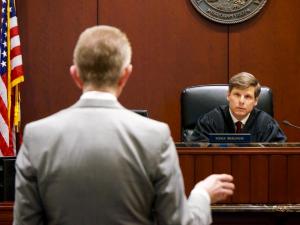 Raleigh, N.C. — Prosecutors in the trial of a man accused of killing his colleague and friend neared the end of their case Friday afternoon but not before the presiding judge refused to declare a mistrial and remove himself from the case.

The move came after defense attorney Joseph Arbour accused Superior Court Judge Paul Ridgeway of being biased against his client, Jonathan Broyhill, who is accused of first-degree murder in the April 2013 stabbing death of Jamie Kirk Hahn.

Ridgeway had made several technical rulings Friday morning regarding how Arbour could ask questions during cross-examination of the lead police investigator on the case.

Arbour also cited several prior rulings by Ridgeway as the basis of his request, including one at the beginning of jury selection in which Ridgeway refused a request that Broyhill be allowed to shave his beard.

Another had to do with limiting questions the defense could ask potential jurors during jury selection. Arbour also took issue with the judge’s directive to refer to Broyhill by his last name when questioning witnesses.

Ridgeway said Arbour’s allegations were insufficient to refer the case to another judge.

“The record fails to demonstrate objectively that the grounds for disqualification actually exists, and I find the motion lacks substantial evidence that might reasonably call the judge’s objectivity into question,” Ridgeway said.

Jurors were not present for the hearing.

They spent Friday hearing cross-examination of Raleigh police detective Zeke Morse – the state’s last witness – about interviews he had with Broyhill in April 2013 after Broyhill stabbed Hahn and her husband, Nation Hahn, inside their north Raleigh home.

Prosecutors have suggested a financial motive for the crimes.

They say Broyhill, a longtime friend of the couple, had been embezzling thousands of dollars from the election committee of a former U.S. congressman who had hired Jamie Hahn’s political strategy firm to raise campaign funds. Broyhill worked for Hahn.

Morse has testified that Hahn had been wanting help from Broyhill to resolve some financial matters and had asked him for online banking information to access the account.

Jamie Hahn, however, did not know about the embezzlement, her husband testified this week.

Defense attorneys have admitted that Broyhill was responsible for the crimes but say he is not guilty of first-degree murder because he had no intention to kill Jamie Hahn.

They contend he had been planning to kill himself and that “something snapped” when he attacked Jamie Hahn and Nation Hahn.

Defense attorneys could begin presenting their case on Monday.