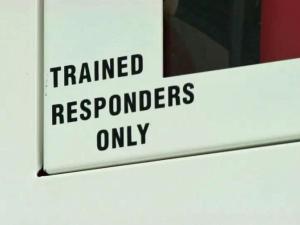 Wake Forest, N.C. — It’s common to hear of medical professionals who care for someone having a heart attack.

That situation took a twist when an eighth-grader at Heritage Middle School in Wake Forest was the patient and a newly formed medical response team came to his aid.

Justin Ochoa was sitting with some classmates Dec. 9 when he went into cardiac arrest. He remembers closing his eyes and everything going to black.

“When we rolled him over, his lips were blue already. You could tell there was no respiration,” said teacher Chris Serwinski.

He and a fellow teacher, Archimedes Dinglasan, were summoned to the classroom.

Both had recent training in lifesaving techniques.

“I knew I could not panic, and I did not, and I just let the first aid training kick in,” Serwinski said.

When compressions and mouth-to mouth-breathing failed to revive Ochoa, the teachers reached for the school’s defibrillator. It took four shocks to bring Ochoa back to consciousness. By then, emergency personnel had arrived and taken over.

“I have never seen so many teachers gathered in one spot, praying for one thing, acting together as a team to provide support for any student,” Serwinski said.

Ochoa missed a couple of weeks of school, but he returned to class. His parents had plenty of praise for the medical response team.

“We honestly saved a life that day,” Serwinski said. “That is really neat!”