I got a tip (send in your tips here) about a company named Boxes of Eden.

The reader was concerned and said, “I believe there is a scam going on to steal credit cards from unsuspecting victims using an elaborate website to promote fresh organic produce to your door in 3 days. They are also selling 4 packs of hand sanitizer. I tried to make an order, filled in the info, and my card was declined. Not possible. Started researching and believe this is a phishing scam using a variety of channels. The site is www.boxesofeden.com.”

I can’t say the site or service is a definitive scam. But it sure has my red flags waving.

Boxes of Eden says they deliver fresh produce to every zip code in North America, including Alaska, Hawaii, Guam, and Puerto Rico. They say, “We are the only service to go everywhere. No exceptions, no blackouts. No matter how remote, we’ll shop organic produce direct to your door in three days.”

Boxes of Eden says they are “run by a faith based charity” and the link takes you to a company named Destinato.

Both Boxes of Eden and Destinato are very quiet about where they are physically located.

According to Guidestar the non-profit Destinato is located at 17901 Von Karman Ave, Suite 600, Irvine, CA 92614. That address happens to be a virtual office space. – Source That EIN is actually registered to a non-profit but the full non-profit name is Destinato Rigore. The IRS says the person in charge of Destinato is Michael Aesir. – Source

While the company says they are located in Irvine, the last filing with the IRS listed them with a mailing address in at 2093 Philadelphia Pike 8893, Claymount, DE and the principal officer lived in Cornelius, Oregon.

The Claymont address is also associated with a Michael Aesir and Jenna Murillo. Two companies are listed as well: Intyrn, Inc. and Intyrnationall, LLC. – Source, Source

Those two companies are for-profit entities.

Let Me Be Perfectly Clear

Nobody can say any company is a definitive scam until there is a victim. All I can say right now is for a company that claims to be able to deliver fresh organic produce across North America, there is a void in information about the company, clients, or even some transparency about where the operation is actually physically located.

One possibility is the organization is totally legit but just very bad at transparency.

For example, the State of California says the company Destinato Rigure is not registered to do business in the state. Its registration was suspended. 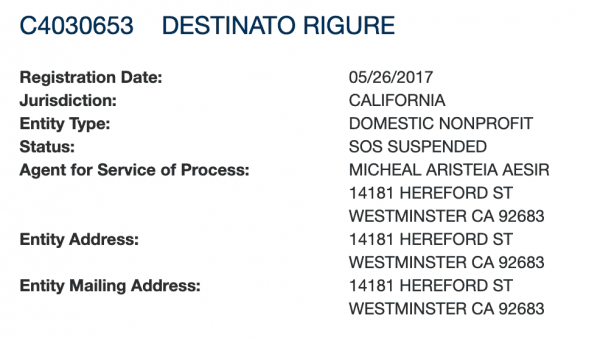 I could not find a registration for Boxes of Eden in California.

My advice is just to check the company out before you give up any personal information. And if you are satisfied with your research, please post an update in the comments section below.

You can use the following guide to do your research, How to Check Out a Business or Company to Avoid Getting Scammed or Ripped Off

The post Boxes of Eden and Destinato Have My Scam Antenna Way Up appeared first on Get Out of Debt Guy – Steve Rhode.