Not saying this will happen but it’s been a crazy year. Here is what you need to know in case it does happen.

What is a militia?

Federal and state laws generally use the term “militia” to refer to all able-bodied residents between certain ages who may be called forth by the government to defend the United States or an individual state. See 10 U.S.C. § 246. When not called forth, they are sometimes referred to as the “unorganized militia.” A group of people who consider themselves part of the able-bodied residents referred to as members of the militia under state or federal law is not legally permitted to activate itself for duty. A private militia that attempts to activate itself for duty, outside of the authority of the state or federal government, is illegal.

How do I know if a group of armed people is an unauthorized private militia?

Groups of armed individuals that engage in paramilitary activity or law enforcement functions without being called forth by a governor or the federal government and without reporting to any government authority are acting as unauthorized private militias.

They sometimes train together and respond to events using firearms and other paramilitary techniques, such as staking out tactical positions and operating in military-style formations. They often purport to have authority to engage in military and law enforcement functions such as protecting property and engaging in crowd control.

These groups often engage in behaviors that show their intent to act as a private militia, such as wearing militarystyle uniforms, tactical gear, or identifying insignia; wielding firearms or other weapons; and operating within a coordinated command structure. Other factors—such as statements by leaders or members’ efforts to direct the actions of others—also may suggest that a group is acting as a private militia. Groups of armed individuals may engage in unauthorized militia activity even if they do not consider themselves to be “members” of a paramilitary organization.

Is it legal to act as a private militia in North Carolina?

No. All 50 states prohibit private, unauthorized militias and military units from engaging in activities reserved for the state militia, including law enforcement activities. Some, including North Carolina, also prohibit paramilitary activity during or in furtherance of a civil disorder. North Carolina’s laws are described below:

North Carolina Statutes Prohibition on private military units: North Carolina law makes it illegal for groups of people to organize as private militias without permission from the state. Under N.C. Gen. Stat. § 127A-151, it is a misdemeanor to “organize a military company, or drill or parade under arms as a military body, except under the militia laws and regulations of the State, or [to] exercise or attempt to exercise the power or authority of a military officer in this State, without holding a commission from the Governor.”

It is a felony in North Carolina to either:

(1) “Teach[] or demonstrate[] to any other person the use, application, or making of any firearm, explosive or incendiary device, or technique capable of causing injury or death to persons, knowing or having reason to know or intending that the same will be unlawfully employed for use in, or in furtherance of, a civil disorder,” or

(2) “Assemble[] with one or more persons for the purpose of training with, practicing with, or being instructed in the use of any firearm, explosive or incendiary device, or technique capable of causing injury or death to persons, intending to employ unlawfully the training, practicing, instruction, or technique for use in, or in furtherance of, a civil disorder.” N.C. Gen. Stat. § 14-288.20. – Source 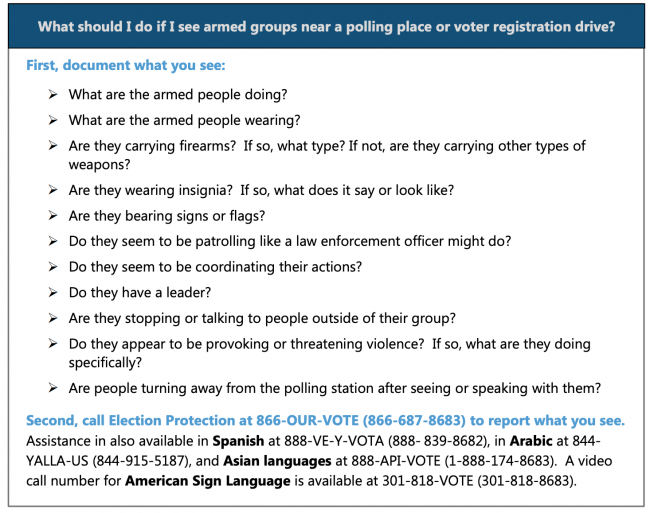 This Fact Sheet has been prepared by the Institute for Constitutional Advocacy and Protection (ICAP) at Georgetown University Law Center, with the pro bono assistance of law firms Akin Gump Strauss Hauer & Feld, Jones Day, and O’Melveny & Myers. ICAP’s mission is to use the power of the courts to defend American constitutional rights and values. Visit us at www.law.georgetown.edu/icap/. Contact us at [email protected]