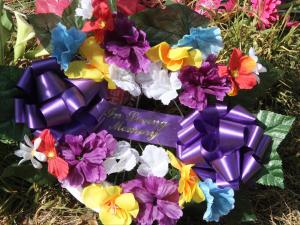 According to the N.C. State Highway Patrol, a blue 2006 Saturn passenger vehicle traveling east on Roseville Road crossed the center line and collided head-on with a white 2008 Mercedes. The driver of the Saturn, 16-year-old Christian Lynn Lockamy and 15-year-old Than’ayha Mary McCullers, both of Wendell, were killed on impact, troopers said.

McCullers, was adopted at age 8 by Mary McCullers. She was born to Ahesha Taylor. Both women shared their grief Monday.

McCullers was not wearing a seatbelt, troopers said.

“I just want everybody to know, please be on your children hard, please, because I know my daughter wears seatbelts,” said Taylor. “She always did. I don’t know what happened that day. I don’t know.”

Mary McCullers said her daughter snuck out of their home on the morning on the crash.

Speed or alcohol do not appear to be factors in the crash, troopers said.

According to troopers, Lockamy had a provisional license and her only violation of the law was having a passenger in the car who was not wearing a seatbelt.

The cell phone records of both teens will be reviewed to determine if a distraction played a role in the crash, troopers said.

Lockamy’s mother told WRAL that her daughter was an honors student at Corinth-Holders High School in Wendell. A memorial will be held for her on Tuesday, 2 p.m., at Beulah Baptist Memorial Church in Zebulon.

A GoFundMe page has been created in Lockamy’s memory.

The driver of the Mercedes, Kimberly Harris Nipper, 45, of Raleigh, was taken to WakeMed with non-life-threatening injuries.