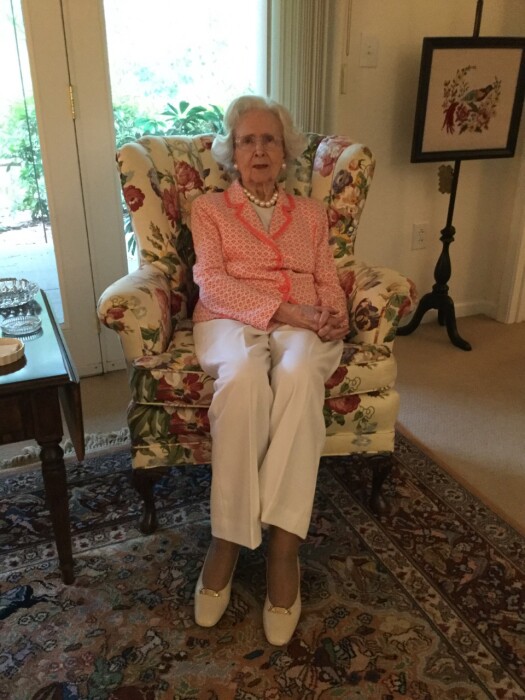 Lee “Mae” Jones Pearce, quickly approaching the amazing age of 99, died peacefully at home on Monday, April 18, 2022. Mae and her beloved husband, Leslie A. Pearce, had made Magnolia Glen Retirement Community in Raleigh their home since 2003. “Les” passed away in May, 2012 having been married to “Monkey” for 65 years.

Mae is survived by her children, Debbie Pearce Godwin and husband, Dan of Blowing Rock, NC and Leslie T. Pearce and wife, Lynn of Raleigh. She is also survived by Pearce Daniel Godwin of Durham, NC, “Ne Ne’s” only grandchild.

Proud to be a native of Wake County, NC, Mae was the daughter of Lee Wyatt and Willie Perry Jones. Growing up on the family farm in the northeastern area of Wake County with four brothers provided many stories through the years that included memories of Saturday trips to the “city” of Raleigh with her daddy on their Model A Ford, dirt roads and all. Without fail, she always denied any suggestion of being just a little spoiled. She was predeceased by each of her brothers, Durward B. Jones, Sr., Donald W. Jones, Millard Jones and Bobby W. Jones. Many extended family members remain in the area, and their continued contact was always enjoyed and appreciated.

Graduating from Rolesville High School, Mae continued her education at WC, now UNC Greensboro, a little too far from her home at the time, Peace College, a junior college then which resulted in transferring and graduating from ECTC, now East Carolina University, in 1945. Graduation from ECTC with a major in business and economics led to a job with the NC Department of Agriculture in downtown Raleigh. It was during this time that Mae met Les at a church picnic as he was finishing his service following the end of WWII. The story passed down through the years contained the words from the tall, dark and handsome serviceman to the southern beauty, “where did you come from?”. Thus began a courtship leading to marriage on June 7, 1947 at which time Les had resumed his career with Carolina Power & Light Company, now Duke Energy. This was the beginning of the CP&L journey for Mae and Les which took them and their growing family from Raleigh to several locations throughout the CP&L system. They were a team. With each move the importance of family, church and community was apparent as both Mae and Les would quickly become involved in numerous volunteer activities always including a garden club for Mae.

Upon returning to Raleigh in 1968 Mae and family again became members of Hayes Barton Baptist Church, and that relationship remained such a meaningful one for all of those many years to come. As she continued with her volunteer service in many areas of the church, she often said that working with mission groups for teenage girls was extra special to her. Also, very dear to Mae and the source of many cherished friendships was her Sunday School class beginning as the Devoted Ruths and merging through the years to become the TMT class.

The team of Mae and Les continued to operate as they together enjoyed many more years of fun times and travel with family and friends often sharing one of their favorite spots, their home in Blowing Rock. Mae continued to enjoy sharing the products of Les’ vegetable and rose gardens. Even at Magnolia Glen a rose bed that Les had begun was still enjoyed and shared by Mae. Always a devoted watcher of ACC basketball with some mixed emotion relating to Duke and Carolina family ties, Mae became an avid bird watcher in her later years quick to point out every cardinal and dove that paid her a visit.

As Mae’s health declined, her charm, wit and role of family matriarch in charge did not. Being met on many occasions by shock from someone learning of her age, Mae would rather demurely reply, “well, thank you”. Her one-liners that only she could deliver would always bring a chuckle and maybe even a bit of a surprised look from those within earshot. Never hesitant to remind one of it being time for a haircut or the need for attire more appropriate for the weather, Mae also never missed an opportunity to insist on not wasting anything. She was a recycler before the word was coined.

Like many of her contemporaries, Mae became a fulltime homemaker and volunteer and never looked back. Her long life was full and no doubt lengthened by the wonderful care provided to her over the last ten years. You know who you are. “Mrs. Mae” loved you, and her family is forever grateful for your care and devotion.

A memorial service will be held at 2:00p.m. on Thursday afternoon, April 21, 2022 at Hayes Barton Baptist Church, 1800 Glenwood Avenue, Raleigh with Dr. David Hailey and Reverend Kristen Muse officiating. The family will greet friends in the church parlor beginning at 12:30 prior to the service. A private burial will take place at Raleigh Memorial Park following the memorial service.

In lieu of flowers, the family requests memorial gifts be made to the Hayes Barton Baptist Church TV Ministry or Family Life Center Fund, 1800 Glenwood Avenue, Raleigh, NC 27608 or the charity of choice.