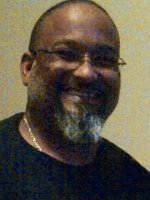 Jose Felipe Buitrago, 49, of Youngsville, passed away Saturday April 18, 2015 at his home. He was born in Puerto Rico and was a veteran of the United States Marine Corps. Mr. Buitrago was a Foreman with Toney Lumber in Louisburg and will be greatly missed by everyone that knew him.

Jose was a fan of UNC Men’s Basketball and a lifetime fan of the Pittsburgh Steelers. He had three dogs he adored, Sasha,Valentino and Mia.

Funeral services will be held at 2 o’clock Friday afternoon April 24, 2015 in the Chapel of Bright Funeral Home. Burial will follow in Pine Forest Memorial Gardens.

Memorial contributions can be made to the Lung Cancer Initiative of North Carolina, 4000 Blue Ridge Rd, Ste. 170 Raleigh, NC 27612.