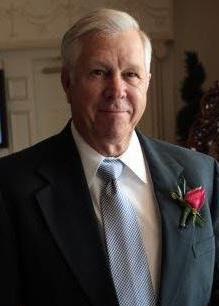 Garry Gable Baker, 81, of Youngsville passed away on Thursday evening May 5, 2022 at Rex Hospital. He was born in Franklin County, son of the late Ernestine Pearce Ellis and Jesse Baker. He was raised by his grandparents Addison and Adna Pearce, whom he called “Papa and Mama”. In his younger years, Garry served as an Army National Guardsman from 1960-1966 as a field communications crewman. He retired as the Traffic Violations Director with the city of Raleigh in 1996 after 38 years of service. After his retirement, Garry worked as a Farm Bureau Crop Adjuster for 20 years. He was an avid golfer and a member of Rolesville Baptist Church.

A funeral service will be held at 11 o’clock Tuesday morning May 10, 2022 Rolesville Baptist Church with Dr. Randy Bridges officiating. Burial will follow in the church cemetery.

Mr. Baker is survived by his wife Vickie Lloyd Baker, his daughter Beverley Baker of Wendell, his son Keith Baker and his wife Elizabeth of Youngsville, 6 grandchildren and 5 great grandchildren with one on the way.

Friends may visit with the family in the church from 9:30 AM until 10:45 AM prior to the service. Memorial contributions can be made to the Rolesville Baptist Church Building Fund P.O. Box 185 Rolesville, NC 27571.