Wake Forest Police are asking for the public’s help identifying and locating the individual shown in the attached surveillance images. The subject is wanted for questioning in connection with multiple vehicle break-ins in the vicinity of Main Divide Drive in the Bowling Green subdivision. The crimes occurred May 15-19 between 9-10 p.m. 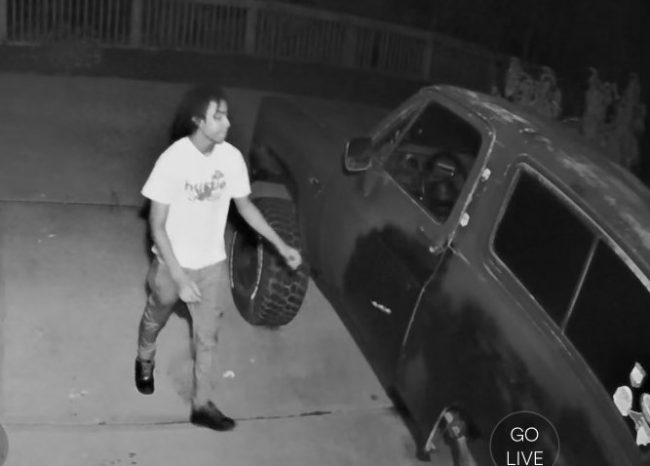 The suspect is described as a male in his late teens or early twenties standing approximately six-feet tall, with short to medium length dreads, and a thin build.

The individual may have an accomplice (not shown) described as a white male in his late teens or early twenties with medium length brown or red hair, and a thin build.

Police officials say most of the reported car break-ins in Wake Forest involve unlocked vehicles. Often, thieves engage in what is known as “car-hopping.” Car-hopping occurs when criminals roam neighborhoods at night, pulling on car door handles, hoping to find an open vehicle. Police say it’s a numbers game. For every 10 cars a criminal checks, they expect to find at least a couple open, so there is no need to physically break a window or door lock to get in.

The best way to avoid becoming a victim is by always locking your unoccupied vehicles, removing your valuable items and any extra set of keys from the vehicle, and double-checking to make sure your car is locked before going to bed at night. If an item can’t be removed, then it’s best to make sure it is out of sight to potential crooks looking for an easy target.

Making sure Wake Forest is a safe place to live and work requires the cooperation of the Police Department and the town’s residents. To report suspicious behavior or activity, call 919-554-6150 or 919-556-9111.