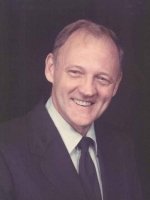 James Roscoe Weiss, Sr., 89 passed away Monday morning April 20, 2015 at his home surrounded by his loving family. He was born in South Ardmore, PA. June 15, 1925 to the late Roscoe and Stella Katkowski Weiss. He attended School in Goshen, N.Y. Jim was a devoted husband and father.

He was a Eucharistic Minister at Holy Trinity Catholic Church in Poughkeepsie, N.Y. for several years.

He was a member of St. Catherine of Siena Catholic Church, American Legion and the VFW in Wake Forest, N.C.

Jim served in the U.S. Navy during WW II and the Korean Conflict. He retired as a Captain with the New York City Department of Corrections and also retired from IBM, Poughkeepsie, N.Y.

Memorial contributions may be made to Heartland Hospice 3200 Atlantic Ave. Suite 100 Raleigh, NC 27604.

A mass of Christian Burial will be held 10 o’clock Wednesday morning April 22, 2015 at St. Catherine of Siena Catholic Church in Wake Forest, N.C. Burial will follow in Raleigh Memorial Park in Raleigh, N.C.