A glimmer of hope for all the good people trapped in those old horrid federal government Spousal Consolidation Loans for student loan debt. 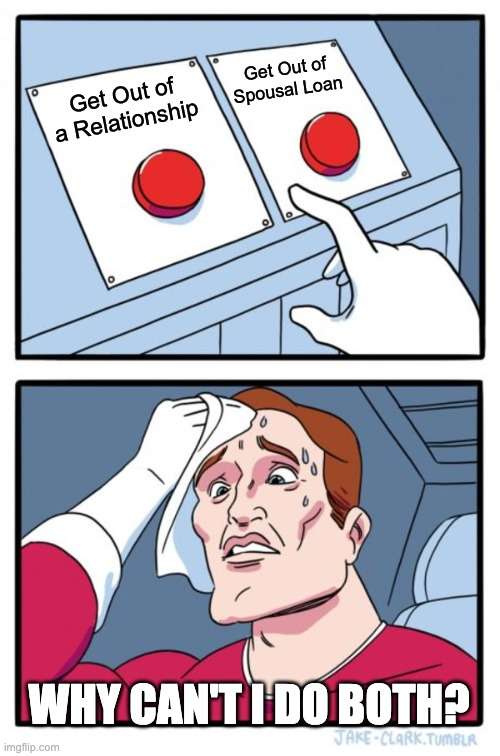 These loans have been a shame for many years. The Department of Education allowed spouses to put their individual loans together into one new loan but never provided people a way out.

I’ve seen far too many cases where a couple gets divorced and is stuck together by loans. Or when a spouse dies and the surviving spouse must repay all the debt. And then there is the tragic situation where a couple may be trapped in a cycle of domestic abuse but welded together by a Spousal Consolidation Loan.

A bipartisan bill titled the Joint Consolidation Loan Separation Act of 2021 has just been approved by the Senate. However, don’t get all excited just yet. It still has to pass the House before the President can sign it into law.

“Survivors of domestic violence should never have to pay the debts of their abuser,” Rubio said. “This bill would provide financial independence to those survivors who previously consolidated their student loan debt with their partner. I am grateful that the Senate passed this important legislation and I urge the House to do the same so that we can deliver much needed relief to these individuals.”

“The Senate passage of this commonsense legislation is a huge step for survivors of domestic violence and financial abuse who have spent decades fighting for their financial freedom,” Warner said. “By finally allowing individuals to sever their joint consolidation loans, this bill will provide needed respite to vulnerable individuals who are being unfairly held responsible for the debt of a former partner. I urge my House colleagues to act with urgency and send this bill to the President’s desk as soon as possible.”

I’m hopeful but not seeing this needed change become law is not a given considering this was first proposed in 2017 by Senator Warner and it is still not law.

To amend the Higher Education Act of 1965 to authorize borrowers to separate joint consolidation loans.

Be it enacted by the Senate and House of Representatives of the United States of America in Congress assembled,

This Act may be cited as the “Joint Consolidation Loan Separation Act”.

(1) by striking “A borrower” and inserting the following:

(2) by adding at the end the following:

“(ii) ELIGIBILITY FOR BORROWERS IN DEFAULT.—Notwithstanding any other provision of this Act, a married couple, or 2 individuals who were previously a married couple, who are in default on a joint consolidation loan may be eligible to receive a separate Federal Direct Consolidation Loan under this part in accordance with this paragraph.

“(B) SECRETARIAL REQUIREMENTS.—Notwithstanding section 428C(a)(3)(A) or any other provision of law, for each individual borrower who applies under subparagraph (A), the Secretary shall—

“(I) shall be for an amount equal to the product of—

“(aa) the unpaid principal and accrued unpaid interest of the joint consolidation loan (as of the date that is the day before such separate consolidation loan is made) and any outstanding charges and fees with respect to such loan; and

“(BB) in the case in which both borrowers request, on the basis of proportions outlined in a divorce decree, court order, or settlement agreement; and

“(ii) in a timely manner, notify each individual borrower that the joint consolidation loan had been repaid and of the terms and conditions of their new loans.

“(i) JOINT APPLICATION.—Except as provided in clause (ii), to receive separate consolidation loans under this part, both individual borrowers in a married couple (or previously married couple) shall jointly apply under subparagraph (A).

“(I) the individual borrower certifies to the Secretary that such borrower—

“(cc) is unable to reasonably reach or access the loan information of the other individual borrower; or

“(II) the Secretary determines that authorizing each individual borrower to apply separately under subparagraph (A) would be in the best fiscal interests of the Federal Government.

(3) by adding at the end the following:

“(dd) for the purpose of separating a joint consolidation loan into 2 separate Federal Direct Consolidation Loans under section 455(g)(2).”.