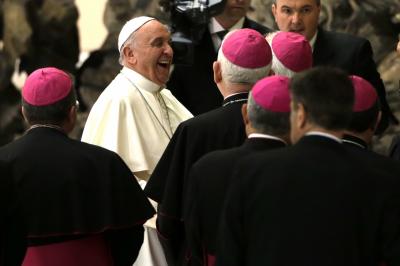 VATICAN CITY — Hang up on Pope Francis and you might get a hug.

Vatican newspaper L’Osservatore Romano says earlier this week, Francis dialed an ailing Italian man to comfort him. Francis has a habit of calling people who he has heard are suffering and telling them “Hello, I’m Pope Francis” when they answer their phone.

The newspaper said the man, Franco Rabuffi, hung up twice, thinking it was a prankster.

On the third call, he realized it truly was Francis and was speechless. The paper says Francis told Rabuffi he was amused. Rabuffi and his wife were invited to the pope’s public audience Wednesday in St. Peter’s Square, where Francis hugged them and assured them he really did dial the man’s phone.

The paper didn’t specify the man’s illness or age.