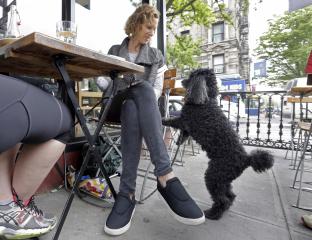 NEW YORK — Never mind the doggie bag: Spot wants a seat at the outdoor table, or rather under it.

New York is considering whether to join a growing number of states that give pet dogs legal entree, if not actual entrees, at open-air eateries.

Dog lovers and restaurateurs say the proposal would safely accommodate people who want to dine out with man’s best friend in places from Manhattan sidewalk cafes to country ice cream stands. But a statewide health officials’ group is against it, and at least one lawmaker is raising questions, and some restaurant-goers fear an onslaught of begging, barking, biting and other doggie don’ts — or, worse, doggie dos.

Owners like Michelle Vargas feel the estimated 500,000 dogs in the nation’s biggest city have a place in al fresco dining and it’s not on the pavement outside a patio railing, where the current law would have them.

“For me, there’s nothing better than being with — I don’t even call them my dogs. They’re my boys,” Vargas said while relaxing this past week with her poodle mixes, Luigi and Carmine, and a friend’s wire fox terrier at an outdoor Manhattan park cafe.

American public health officials have long banned pet dogs from eateries, out of concerns including potential biting or transmitting germs to people’s food. A 2013 study in the Journal of Environmental Health found such risks haven’t been clearly quantified amid slim research.

Aficionados counter that dogs hang out safely in home kitchens and even make hospital visits. California, Florida, Maryland, New Mexico and some other states and communities around the country have opened restaurant patios to dogs within the last decade; North Carolina even approved cats, too.

After getting a unanimous OK from New York’s Senate, advocates are pressing its Assembly to sign on this spring.

New York City’s 83,000 restaurant inspections per year yield only about 170 tickets for letting pets in. But furry faces often can be seen while inspectors are elsewhere.

Dougie the poodle peeked discreetly from beneath owner Marni Turner’s chair at a Manhattan sidewalk cafe table one recent day. If he could be a legit guest, “it would make my life a lot easier,” Turner said.

State Sen. Kemp Hannon and Assemblywoman Linda Rosenthal say their proposed law would do that, while protecting people’s safety by barring servers from petting dogs and banning dogs from the furniture, among other provisions.

The lawmakers, who don’t have dogs, stress that restaurants could decide whether and how to host Fido outdoors. Options could include special sections.

Albany pub manager Tess Collins would welcome having permission for patio dogs, since many patrons already bring them along.

“It’s created a camaraderie” among customers, she says.

But the idea gives some New Yorkers pause.

“Who wants somebody’s dog next to them, begging, when they’re trying to eat?” says Erik Galloway, of Shoreham, on Long Island.

He likes dogs generally but notes diners can’t be sure how healthy another patron’s dog is.

To be sure, there are some cautionary tales.

Moon Under Water was the first St. Petersburg, Florida, restaurant to seek a permit to welcome dogs on its patio after a 2006 state law opened the door. But the pub banned them after three months.

They sometimes yapped at each other and patrons and, in one case, vomited after being fed mashed potatoes, recalls manager Mark Logan, a dog owner.

“It kind of got overwhelming,” said Logan, who also worried about insurance liability if someone got bitten.

Yet canines have been guests of honor for nearly a quarter-century at the Barking Dog Cafe, a Manhattan restaurant that promotes its patio’s dog-friendliness.

“Actually, sometimes a dog is more behaved than we are,” general manager Fokol Kaci says. “You can tell it, ‘Sit down,’ and it will sit down.”